Communities will march on East Dorset on Monday 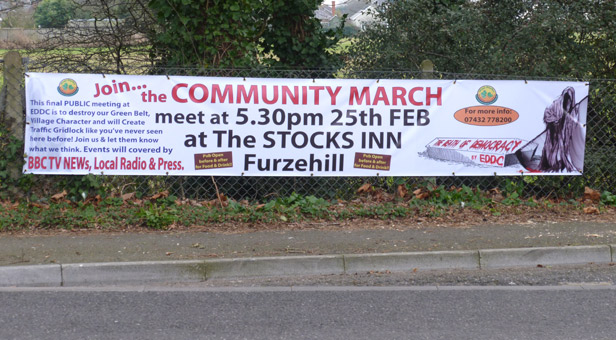 Residents throughout East Dorset are being urged to join the Communities March on Monday, 25 February.

Last June, 100 protestors marched to East Dorset District Council offices to hand in letters of protest about the change in government policy, following proposals to build over 500 houses on green belt land at West Parley.

At that time, Mr Heaslip, chair of West Parley parish council, said the 500-homes plan would increase the number of houses in the village by an unsustainable 32%.

He also voiced concerns that the village would lose its green belt boundary fields, which separate it from Bournemouth.

The District Council will now hold a meeting to approve the plans for sending on to the Government Inspector.

This will occur at 6.30pm, Monday 25 February at Furzehill.

West Parley Residents Association claim on their website that ‘only about 40 people from the whole of East Dorset can attend.

They – and business interests – can only speak for 5 minutes between them. This’, they say ‘is the death of local democracy’.

The Residents Association has invited communities from Colehill, Corfe Mullen, West Parley and Wimborne to tell the council what they think at the council’s front door for the whole country to hear.

The Communities March will be covered by BBC TV, press and radio. It will start at the Stocks Inn, Furzehill at 5.30pm on Monday, 25 February and will proceed 200 yards to the council offices.