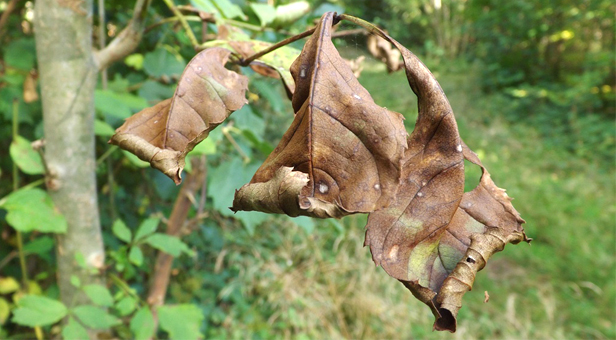 Dorset Wildlife Trust is concerned that a case of the ash tree disease, Chalara, known as ‘Ash Dieback’ has been confirmed in woodland between Dorchester and Bridport.

Caused by the fungus ‘Chalara fraxina’, Ash Dieback is spread by infected ash leaves, and can spread up to 10 miles on the wind.

The fungus infects 60-90% of the trees in its path, causing leaf loss, bark lesions, crown dieback and eventually the death of the tree. Young ash trees are killed very quickly, whilst older ash trees often resist for much longer, but may eventually succumb after prolonged exposure.

Ash Dieback has been spread from large quantities of ash tree which were imported from parts of continental Europe, where the disease was present in 2007. It has since spread to 21 European countries.

DWT’s Trees and Woodland Officer, Abby Gibbs, said: “This is a sad day for ash woodlands in Dorset and across the UK. Further loss of these beautiful trees will undoubtedly affect the species which depend on them to survive. Therefore, we are asking members of the public to be vigilant, and report any sightings of affected ash trees to the Forestry Commission immediately.”

Visible symptoms of infected Ash trees include: dead or dying tops of trees (best visible in the summer), lesions and cankers on stems/branches/shoot, dieback of leaves with brown/black leaf stalks, and staining of wood under bark lesions.

The greatest risk of contamination comes from moving infected plants, and whilst there is a low probability of carrying the spores on clothing or footwear, Forestry Commission advice is to avoid moving ash leaves around the countryside, by ensuring shoes and car tyres are clear of leaves before visiting a woodland or nature reserve.

There are several ways to get in touch with the Forestry Commission if you suspect you have seen an infected tree in Dorset. To report your sighting and upload a picture, visit www.forestry.gov.uk/treealert or you can call 08459 335577. You can also download the app – ‘ashtag’ to your smart phone to record your findings. Please do not attempt to tamper with or cut down the tree, as the Forestry Commission are still carrying out research to identify different strains of the disease.

In addition to reporting and sightings to the Forestry Commission, DWT are asking members of the public to contact us on 01305 264620 if they see any infected trees on DWT land.