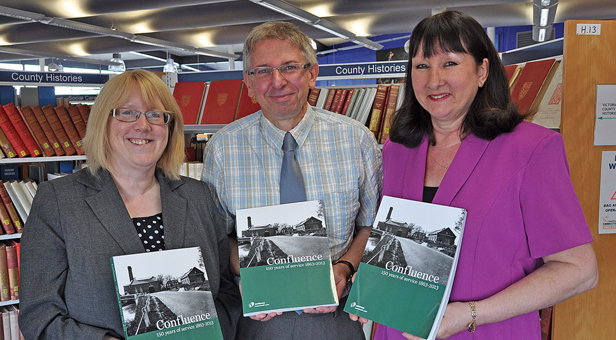 Copies of a book celebrating 150 years of service by Sembcorp Bournemouth Water (SBW) have been presented to 27 libraries across its supply area.

‘Confluence’ by Malcolm Toogood, maps SBW’s progress from its formation as the Bournemouth Gas & Water Company through to the present day.

It tells the company’s story through the eyes of its staff and covers industrialisation, two world wars, major social and political reform, drought, floods and the big freeze, and the development of the towns of Bournemouth and Christchurch.

The title of the book reflects the fact that the business is based on the waters of the rivers Avon and Stour which come together at Christchurch. Likewise, the present day Sembcorp Bournemouth Water is the result of the union of the Bournemouth & District Water Company with West Hampshire Water after 100 years of existing side by side.

Roger Harrington, SBW’s Managing Director, said ‘Confluence’ was dedicated to all employees and directors of the company, past and present, who had shaped and guided it through its evolution.

He added: “150 years ago Bournemouth was a tiny settlement which was beginning to attract the Victorians to the coast, but which had no piped water supply.

“We aimed with this book to record in one place the development of the water system, focussing largely on the people who made it happen through the generations since those times. We hope people will find it a fascinating read and that it might become a useful reference in the future.”

Apart from the 27 libraries in its area of supply, SBW is donating copies of the book to libraries in Poole and Salisbury, as well as Bournemouth University and the Dorset History Centre.

Copies are also available on a not for profit basis directly from the publishers at www.authorsonline.co.uk for £13.99 plus postage and packing.