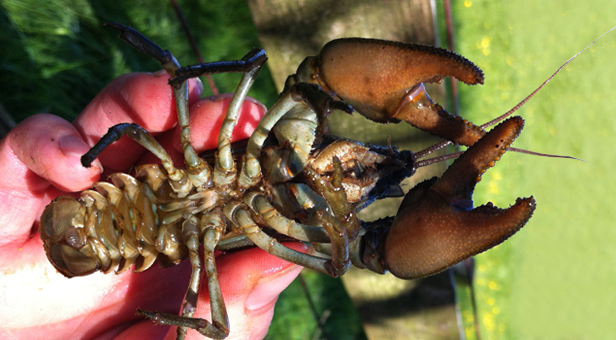 A new safe haven has been created for endangered White-clawed crayfish by the South West Crayfish Project, with help from the Ministry of Defence (MoD) which owns the land where it is hoped the animals will thrive undisturbed.

A team from Buglife, Avon Wildlife Trust, the Environment Agency, Dorset Wildlife Trust and the Defence Infrastructure Organisation (DIO) worked over two days to move animals from an at-risk population to their new home, at Lulworth Ranges, in Dorset.

The ‘Ark’ site is the 13th to be established by the South West Crayfish Partnership -and it is hoped that these safe havens will prevent the extinction of the species in the South West region. The White-clawed crayfish is the UK’s only native crayfish and is under threat of extinction in south west England in particular due to the spread of the non-native American signal crayfish.

Lydia Robbins, Species Officer at Avon Wildlife Trust who led the translocation, explains, “Historically, there were vast numbers of white-clawed crayfish in Dorset’s rivers. In 1976 the first American Signal crayfish farm in England was set up in Dorset so the outcome is particularly fitting.”

Lydia added, “Having first identified this Ark site two years ago it is exciting to see it finally happen.” DIO is the MoD’s property and services provider, managing the Defence estate to support Britain’s Armed Forces as they prepare for operations.

DIO ecologist Oliver Howells said, “DIO is keen to support initiatives that benefit rare species. Like much of the MOD estate the release site has good habitat and high water quality because of the lack of intensive agriculture within the catchment, which made it a good choice for this project.”

Andrew Whitehouse, South West Manager for Buglife, said: “Establishing Ark sites is our best chance of ensuring that South West England’s White-clawed crayfish have a brighter future. This new Ark site in Dorset is a great example of how a large number of organisations can work together to save some of our most threatened species. We hope that the crayfish will thrive in their new home.”

The South West Crayfish Project is funded by the Environment Agency, Biffa Award and the BBC Wildlife Fund.