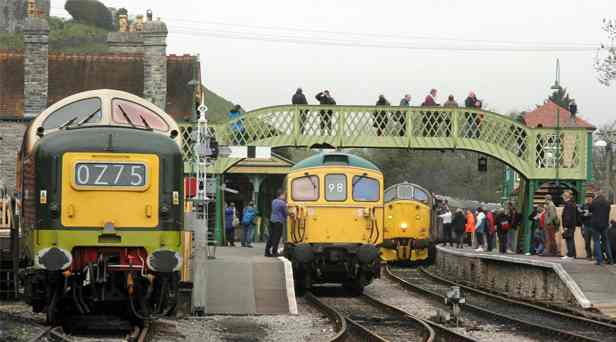 Enthusiasts from across the country flocked to the annual event – and its associated Dorset Beer Festival – which ran from Thursday, 9 May, to Sunday, 12 May, 2013, and saw eight classic visiting main line diesel locomotives in action along with three resident Swanage Railway locomotives.

The Thursday saw a nostalgic Push-Pull Day, sponsored by SouthWest Trains, return the Isle of Purbeck to the ‘Swinging 1960s’ and the ‘Summer of Love’ – marking the 25th anniversary of the end of 1967 ‘push-pull’ slam door trains between Bournemouth, Poole, Dorchester and Weymouth during the summer of 1988.

Delighted Swanage Railway chairman Peter Sills said: “The fact that we carried almost 3,100 passengers in four days is a tribute to all the volunteers who worked so hard to achieve this result through several months of planning and then actually delivering and managing what was an attractive and enjoyable event now in its ninth year. The feedback and appreciation from Diesel Gala visitors was very good and the excellent passenger performance is a tribute to everyone who worked so very hard throughout the event to make it such a success…”