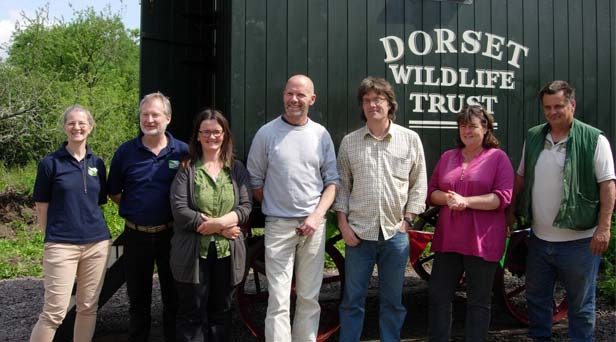 A rare piece of Dorset’s history has been brought to Dorset Wildlife Trust’s Kingcombe meadows nature reserve in the form of a living van, which has been restored by Piddlehinton based hut makers, Plankbridge.

Living vans were used up until the 1950s and were often towed behind steam engines by road workers who needed to travel to sites all over the country for long periods of time. Back then they provided a comfortable home, and now they provide a nostalgic insight into life before technology and an interesting and unique place to stay!

The unveiling of the living van is the result of over 300 hours of work from the Plankbridge team. Hut maker and restorer, John Farrar, said:, “When we received the living van the whole thing was, on the face of it, quite complete but very decayed. At Plankbridge our philosophy is to remain true to the traditional design so I put myself in the mind of the people who made it 100 years ago and set about restoring it like for like.”

Richard Lee, owner of Plankbridge said: “It was a real pleasure for us to restore the rare Victorian roadman’s living van for Dorset Wildlife Trust. We are firm believers in preserving the Dorset countryside and are delighted that our traditional craftsmanship skill shave been used to help create an alternative, yet sustainable space for education at the Kingcombe Centre.”

Greenhill Down nature reserve, which was founded by Angela Hughes OBE, was home to the living van for 40 years and was used as a meeting place for DWT site meetings up until the late 1990s. The Living Van has been dedicated to the memory of Angela, who was great friends with DTW’s founder, Helen Brotherton, CBE. Felix Hughes, Angela’s son said, “Preserving the living van is a really good idea. I spent time there 3 or 4 times a week when I was younger. It brings back great memories for me.”

Rob Brunt, Head of Land Management for DWT said, “It has been great working with everyone at Plankbridge. We are so pleased with the living van. It is so important to preserve the history of DWT and remember those, such as Angela Hughes, who helped us get to where we are today.”