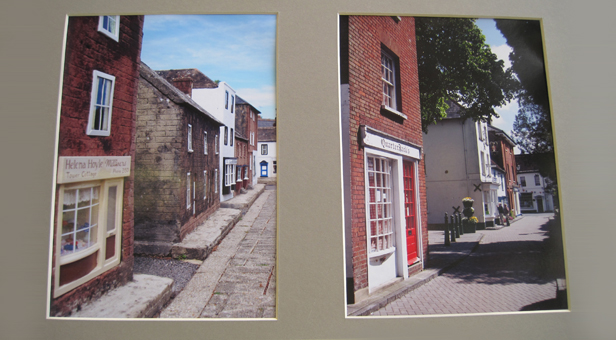 Jointly commemorating the 60th Anniversary of the Town’s Chamber of Trade inauguration in the same year as the Coronation of Her Majesty Queen Elizabeth II, the exhibition juxtaposes images of town centre shops and businesses as they appeared in 1953 with the same locations to-day.

Despite a gap of 60 years, all the photographs were taken by the exhibition’s creator Paul Gruitt within just a few days of each other. This ‘double-take’ effect was made possible because of the existence of the unique Wimborne Minster Model Town, also created in the early 1950s.

President of the Wimborne Chamber of Trade and Commerce, Diann Marsh, said, “Through a dozen pairs of photographs, with more on display inside the shop, and using no Photoshop trickery, twin images of each view are aligned as closely as possible, illustrating often striking similarities or differences. Anyone taking the time to give the images a closer second look can experience the almost surreal effect of the unexpected, revealed in the familiar and commonplace.

Now arguably genuine antiques in their own right, over 100 shop fronts from the Model Town are removed and renovated each winter by an army of volunteers.  Whilst in storage and awaiting replacement into their 1/10 scale architectural carcasses the ‘shop-boxes’ are hidden from public view, but special permission was recently granted to Paul by the attraction’s previous manager, Stuart Bevan, to photograph a selection of the exhibits with Diann March, ‘enthroned’ amongst them and the resulting image forms the centre of the display.

It is hoped that the exhibition might also encourage a re-evaluation of the Model Town as a useful historical tool in understanding how Wimborne Minster’s trading patterns have changed over the last half century or so and how they might evolve in the future.

The display will remain in place during the summer.