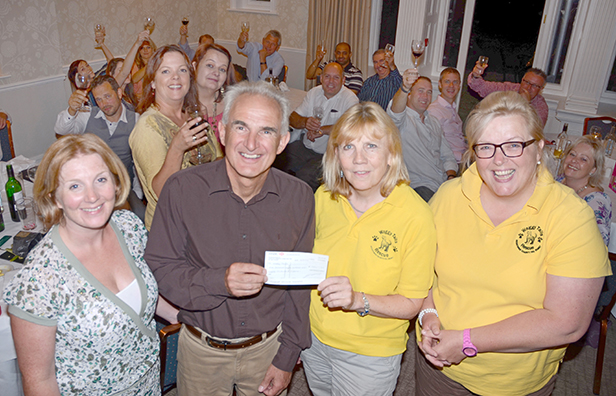 The pet store group PamPurredPets raised over £1,800 for the Dorset based animal rescue and re-homing charity Waggy Tails Rescue. Thirty suppliers and business contacts from the pet trade industry joined PamPurredPets founder and Managing Director Steve Fowler on the annual fun day in September. Held at the Moorhill House Hotel in Burley, the guests participated in the unusual activities of duck herding and fire lighting without matches or lighters. A visit to the New Forest Cider makers followed before dinner, when a fundraising raffle was then held with members of the charity attending as guests of honour.

Steve Fowler and the event’s organiser Charlotte Sturmey from PamPurredPets were thanked by one of the Waggy Tails Trustees Chrissie Davies who also gave a presentation explaining how the recession and unemployment has put greater pressure on the re-homing and care services provided by Waggy Tails. She said the funds would contribute to a new training facility at the centre.

Steve Fowler said: “We are delighted to be able to help, not only through the corporate day but also by raising additional funds throughout the year in our 45 stores. Store staff oversee collection tins and donation bins in which dog food is gathered to help feed the rescued stray, abandoned and impounded dogs.”

Anyone who can offer any support for the charity, or would like to rehome an animal, should call 01202 875000 or visit www.waggytails.org.uk