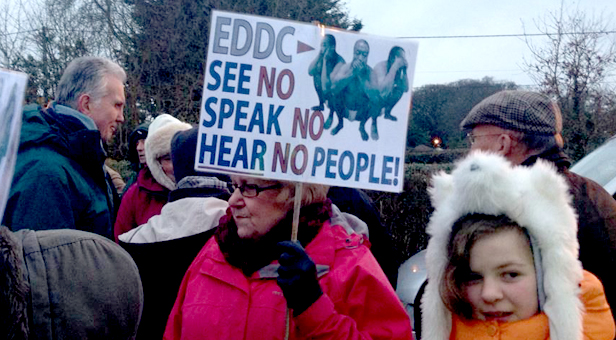 Despite 200 campaigners marching to East Dorset District Council last night, claiming democracy was dead, the full council meeting went ahead without disruption. Members voted overwhelmingly in favour of submitting the core strategy to the Secretary of State: 23 for, 4 against and 6 abstentions.

Within the strategy are proposals to build on some of East Dorset’s green belt, including the large field at Parley Crossroads, which is earmarked for over 500 houses. Other green belt housing developments have been identified in the core strategy in Corfe Mullen, Wimborne and Verwood.

Campaigners maintained that the council had made it difficult for them to be involved with the consultation process and felt that the decision-making was not democratic. Kieran Ryan from West Parley said, “No one is listening to what we’ve got to say. We’re not against housing because our children will need homes, but it should be limited. Have you seen the core strategy? It is very difficult to read and for people to express their views.”

He was concerned about the level of traffic that would be generated by the increased number of houses. He said, “Parley Cross is probably one of the busiest junctions in Dorset and it will be chaos for the road system. The planners at East Dorset District Council haven’t thought it through.”

Leader of East Dorset District Council, Cllr Spencer Flower spoke out today and said, “The core strategy has been subject to extensive consultation and engagement over the last few years, including a 40-week consultation period, and this version of the strategy is the result of that process.

“Despite some comments to the contrary at yesterday’s meeting, I am pleased to say that democracy is alive and well in East Dorset. Elected members openly discussed, debated and considered the decision to submit the core strategy at a meeting which was open to the public and where members of the community were given the opportunity to make a presentation.”

Recognising that this item was likely to be of interest to a large number of local residents, the council increased the time usually allowed for public participation and made the meeting available to view over the internet, so that more local residents could follow the process and watch the discussions from their own homes.

At the same meeting East Dorset District Council set the budget for 2013/14, to include an increase to its share of the Council Tax.

The 2013/14 budget will see a 1.95% rise in the district council’s share of the Council Tax. This small increase amounts to 7p per week for a Band D property.