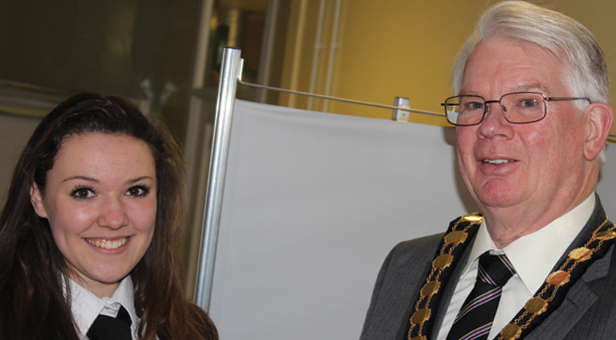 Ferndown Upper School pupils took part in the elections for the United Kingdom Youth Parliament (UKYP) members for the South West, and mags4dorset was invited to observe the electoral process in action.

The UKYP enables politically-minded young people between the ages of 11 to 18 to represent young people in their area to the government, over a wide range of issues.

Moya Dunne, Year Eleven, standing for re-election said, “I am quite nervous, but in my time as a member of the Youth Parliament, it’s been an experience to get recognition for my work. If elected this year, I want to focus on improving the curriculum to aid students in preparing for life, giving them key skills in areas such as finance and politics.“

As they were led to the ballot boxes, deputy head Nigel Harris, explained the intricacies of the voting process to the Year 9 pupils. It was then time for them to cast their own vote in the boxes, to choose their candidate as their new MYP for Dorset. Stations were set up to enable privacy, mirroring the adult voting process.

Members of the school council acted as electoral officers, supervising the voting process of the pupils.

Headmaster Alex Wills said, “Ferndown Upper School has been doing this every year for the past six years. The school has had three MYPs in that time, and has always had a strong tradition of participating. It is important to model the democratic process in school, as we really need to get young people voting, so that they know what to do when they are eighteen.”

John Wilson, Chairman of Dorset County Council added, “I am delighted to support the school, and am particularly pleased for young people taking part. Education factors in the process of casting a vote, and this is a positive contribution to the needs of young people in the area. It’s not a pretend event, but a real democratic process with real ballot boxes, and a real focus on democracy – and that’s what its all about at the end of the day. The opportunity to debate at the Annual Sitting with John Bercow as the speaker is a great experience.”

Mayor of Ferndown, Terry Cordery said, “I am amazed at the organisation and behaviour of the pupils today. You hear a lot of bad things about young people – but today has been brilliant.”

Results will be announced on 14 February.