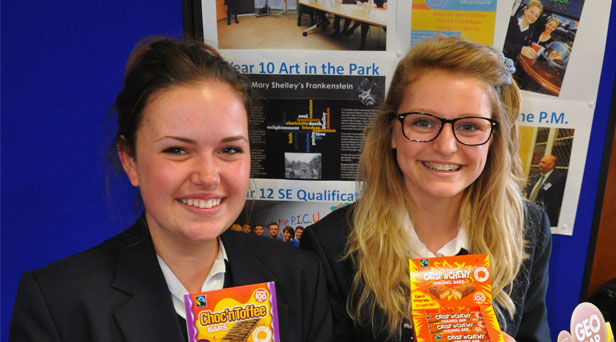 Two young girls’ love of animals took them on an enterprising crusade to help endangered species, whilst promoting Fairtrade.

Georgia Brooker and Danni Cotterill, both year 10 students at Avonbourne College in Bournemouth, have formed their own social enterprise company to raise money for the World Wildlife Fund (WWF) and support the producers of Fairtrade goods.

Calling themselves Corgreen, the two teenagers have entered an enterprise competition to raise as much money as possible.

The ‘Tenner Challenge’ sees students given  £10 each to buy products with the aim of raising as much profit as possible.

Georgia and Danni used their £20 to market themselves and set up stall in the school to sell Fairtrade products throughout May.

Their efforts attracted a £500 endorsement from the Co-op. They also sold Bournemouth Borough Council 50 Corgreen bags, containing a range of fair-trade treats.

Georgia said: “We started Corgreen when we did a project at school about animal adoption packages.

“Hearing about how many endangered species there were in the world made us both want to do our bit to help raise money for the organisation working to protect these animals from extinction.

Avonbourne is applying to become a Fairtrade college so we thought selling Fairtrade goods was a good way to make enough profit to fund the adoptions and support this bid.”

At the end of their endeavours, the girls raised a total of £700 which will go to the WWF – and will also be noted as part of their entry into the Tenner Challenge.

The girls will find out later this month if they are one of the winners.

Avonbourne College’s executive headteacher, Debbie Godfrey-Phaure, said, “Georgia and Danni have combined their caring natures with excellent entrepreneurial skills to raise a fantastic amount of money for a good cause. The girls are already winners as far as we are all concerned.”