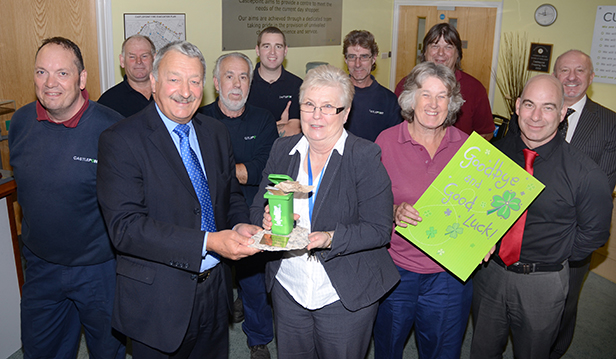 Peter Matthews, General Manager at Castlepoint, presented retiring Environmental Manager Leslie Garcia an appropriate trophy amongst the cards and gifts as the team said goodbye – a model of a green recycling bin on a stone plinth.

Leslie, from Ferndown, started her role at the shopping park in March 2007 when the management were planning to reduce 965 tonnes rubbish sent to landfill. Peter Matthews says that with Leslie’s help and professionalism, the figure has been reduced to zero, with food, glass, cardboard, paper, plastics, pallets, polystyrene and metal now being recycled and in many cases generating money, rather than face the ever increasing costs of landfill charges.

“Leslie has led the challenge to make Castlepoint a more environmentally responsible operation. The focus has not just been on rubbish – she has overseen significant improvements in to the landscaping and has ensured that we minimise the chemicals used to clean the site so reducing the harm to the environment. We would like to think that Leslie is being ‘up-cycled’ to a more pleasant life with the family than just retiring!”

Leslie, 63, says that she looks forward to spending more time with her new four months old granddaughter lives in London but will miss the day to day activity at Castlepoint.