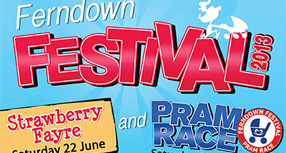 The week long Ferndown Festival starts on Saturday 22 June at 10am with the annual Strawberry Fayre at the Barrington Centre in Pennys Walk.

There will be a host of indoor stalls, entertainment, and cream teas. Entrance: 50p, U14s free.

A Comedy Club at the Barrington Theatre on 28 June is also part of the festival and headlines Paul Tonkinson (BBC2’s Comedy Club).

In further celebration, local restaurants will be running themed evenings.

Organized by Ferndown Chamber of Commerce in conjunction with Ferndown Town Council, the Ferndown Festival is a first for the town and includes as its finalé, the inaugural Pram Race from pub-to-pub on 29 June.  Other events on that day include a French Market from 10am with street entertainment and buskers.