Ferndown has its own promenade – in France! 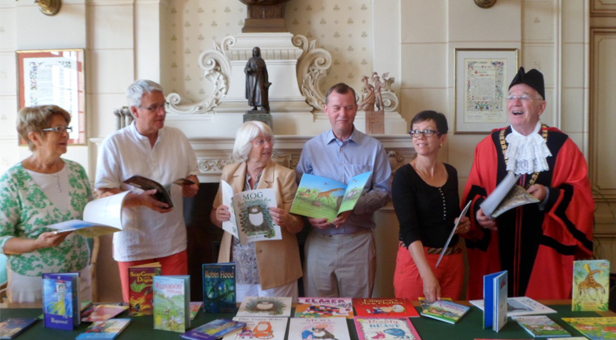 In celebration of 20 years of twinning with Segré, ‘Promenade Ferndown’ was officially inaugurated at a presentation in the French town on Monday, 26 August.

The floral walkway is situated between two bridges along the banks of the River Oudon.

During the ceremony, Ferndown Mayor Cllr John Lewis presented Deputy Mayor Jean-Yves Ledoux with a milestone made of Dorset limestone showing the distance of 289 miles or 465 km between Segré and Ferndown and Dorset’s Jurassic coast.

Mayor John Lewis remarked:  “It was a real honour on my first visit to Segré to present the milestone from the people of Ferndown as part of this historic inaugural ceremony for Promenade Ferndown in a wonderful setting along the River Oudon with splendid floral colour hanging baskets and boxes at every turn.  It was an excellent opportunity for our twinning party to build a rapport with the residents of Segré.”

An official reception followed at the town hall during which a representative of a junior school in Segré received a number of English books donated by Ferndown Neighbourcare (Neighbourcars). They were purchased by councillors John and Joyce Little with donations made to the Neighbourcar scheme.

During the visit, the twinning associations fixed a date for a return visit to Ferndown by representatives from Ségre in 2014 – the 70th anniversary of the D-Day landings.

It is hoped a sporting event can be arranged with Segré and any sports teams interested in taking part can call the chairman of the Ferndown Twinning Association Mrs Pauline Reynolds on 01202 892033 or the town council offices 01202 892249.