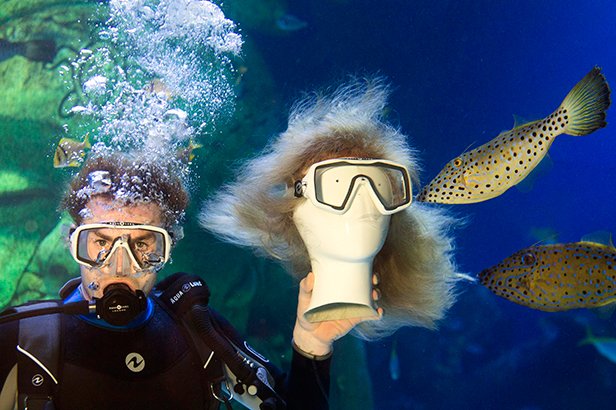 Lead diver Myke Bell and his colleagues who escort visitors on dives in the Manchester Sea Life Centre’s ocean tank, are having their hair constantly nibbled by a pair of tropical ‘scrawled filefish.’

Now, in an effort to distract their tormenters so they can concentrate on supervising their guest ‘Sea Trekkers,’ they have started taking a mannequin’s head and wig for a dip with them.

“At least a couple of times every day we will suddenly feel the tug of tiny teeth on our hair,” said Myke.

“The filefish eat sea grass and algae in the wild and I guess they must mistake our hair for marine plant-life,” he added.

“It doesn’t hurt, but it’s impossible to ignore, and we really need to stay focused on looking after our guest divers, so now we’re using the wig as a decoy.”

And luckily for Myke it appears that filefish prefer blondes. The golden real-hair locks of his decoy keep them happily occupied while he escorts visitors in special suits for their stroll on the seabed.

Scrawled filefish are found in tropical waters of the Pacific, Atlantic and Indian oceans, and in the wild are notoriously shy with divers.

“I confess I thought they’d lost their own heads when the dive team came up with this crazy idea to keep the filefish at bay,” said Sea Life boss Neil Crittenden, “but it really works, and has become a real talking point for visitors. The only other option would have been to have Myke shave his head.”

Myke, 28, is no stranger to underwater hair issues however… and the filefish are a minor irritant compared to the last fish that took a liking to his dark wavy locks.

“I used to dive regularly at another Sea Life Centre, and a huge bowmouth shark called Betty just wouldn’t leave my hair alone.

“At least with the filefish I don’t have to worry about losing my scalp too.”