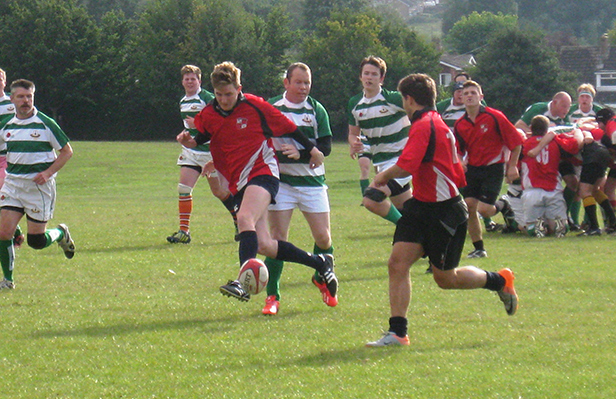 A shortage of Verwood players due to other commitments for their first away game of the season could only inspire greater things than perhaps might have been expected from this gallant squad of just nine men albeit bolstered by the generous and most appreciated loan of Salisbury players by the host club.

Thus, in order not to transgress some of the latest regulations now set by the RFU for grass roots rugby, a full and exciting match was played in the traditional spirit of the game under “friendly” conditions in place of the scheduled Dorset & Wilts league match.

In the circumstances and in the knowledge that so many former team mates had departed from the club to their universities or working away from home over the past two seasons, the Verwood team played their hearts out. They all know their club is now in the process of change with a recruitment campaign in place to rebuild their fortunes and all their travelling supporters felt they were watching the basis of a promising side with a great future. The tackling was strong, regular and consistent and Verwood’s play in all sectors was of a higher level than seen for some time, rewarding them with three tries and one conversion against the more experienced Salisbury side. With a full team it could have been so much different.

If you are eager to play rugby – however experienced or new to the game – and you would like to join a club at its most exciting time – just call the club number 07973 681768 and you can be assured of an immediate response and a welcome to the Thursday evening training nights from 7.00pm at Potterne Park in Verwood.

Verwood’s first home match of the season is at Potterne Park next Saturday, 21 September vs South Wilts – KO 3.00pm