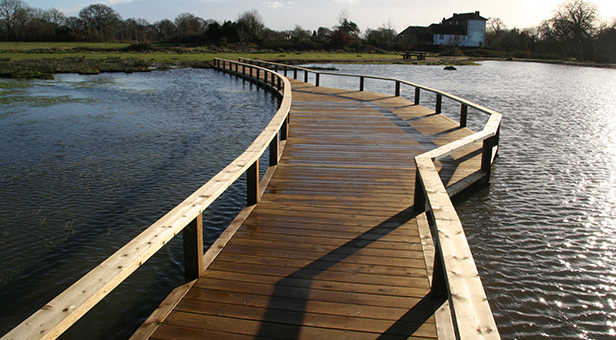 SANGs are designated areas of green space which are intended to provide mitigation for the potential impact of residential development on nearby heathland by preventing an increase in visitor pressure on the heathland.

These sites are funded by developers either directly or via the Heathland Mitigation Fund to alleviate the impact of homes built in the immediate area. In the case of Bytheway, £322,000 was obtained from Charles Church and Persimmon Homes in respect of the housing development on the former Flight Refuelling site in Wimborne and is being used to provide the open space, build a play area and cover maintenance of the site into the future.

The work at Bytheway, which has been managed by East Dorset District Council, includes 3,000 metres of pathway suitable for wheelchairs and pushchairs and development of the 37 acre space.

A lake has been dug at the lowest part of the site, which was often waterlogged, and a walkway constructed across the lake. Benches and signage are being installed ready for an official opening in April and the play area will be constructed to be unveiled in late summer. A fully dog-proof fence is being built so dogs will be safe within the site.

The design concept has been developed in consultation with local people and local companies have been used for the construction of the various elements on the site.

Cllr Spencer Flower said, “East Dorset District Council purchased Bytheway from the National Trust in 1999 and it has been used by local people since then. However, it was an area that we wanted to develop to make it accessible to more people and the Heathland Mitigation Fund provided the necessary funds for the work to be carried out.

“It has been designated as a SANG because it is a site where a large number of visitors will not have a detrimental effect on the biodiversity of the green space. We are proud that this is the first SANG to be provided under the Dorset Heathlands Planning Framework.”

The SANG will be officially opened at 11am on Saturday 6 April by the Chairman of East Dorset District Council, Cllr Lucy Clark.

Return of Dorset charity ride out in aid of DocBike
July 14, 2022