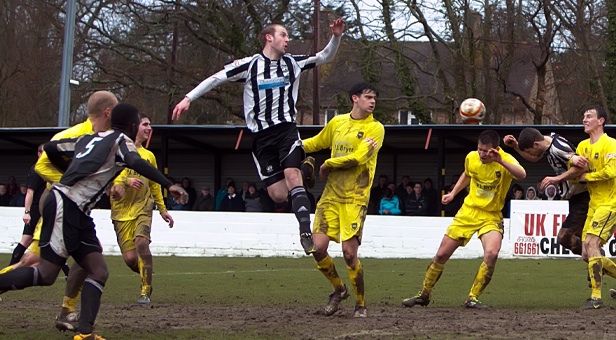 Wimborne Town had been struggling to score goals of late as well as secure victories. But all of that changed last Saturday as the Magpies handed out a 5-1 thrashing to promotion hopefuls Yate Town at Cuthbury.

Heavy rain had wiped out other local non-league fixtures and swelled the crowd to 264.

Wimborne had to endure an early onslaught and were a goal behind as early as the 11th minute. But they fought back with goals from Shaun Brian and Jon Blake and were 2-1 up by the half-time whistle.

The Magpies dominated the second period and a superb goal from Nathan Peprah-Annan put them 3-1 ahead.Blake and Brian both grabbed their second goals of the game as Wimborne scored five for only the second time this season.

This coming Saturday (March 23rd) Wimborne hit the road when they visit a Sholing side which has announced its intention to leave the Southern League at the end of the season. Meanwhile, Magpies striker Tom Jeffes is set to leave the club after being named as the new commercial manager at Leyton Orient.

Jeffes’ last game for Wimborne is expected to be the home clash with Winchester City on Easter Monday.