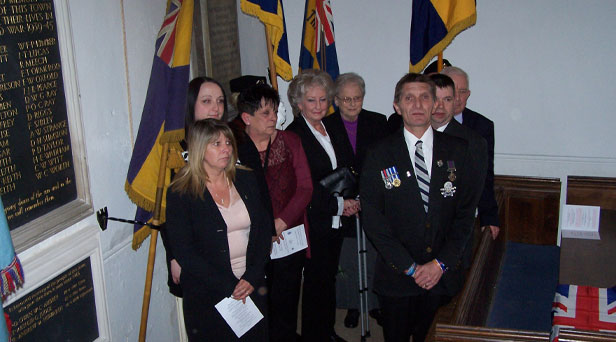 An army regiment paraded through Wimborne on Sunday, 21 April. The Rifles were exercising their freedom of Wimborne Minster, granted to them by the Mayor Cllr John Burden in 2010.

The Freedom Parade, led by the Rifles band, started in Allenview Road car park and proceeded to the square where the mayor, by coincidence – Cllr John Burden again – made a welcome speech and handed over a scroll granting the regiment with Freedom of the Town. In return, the mayor was presented with a silver bugle by Brigadier Richard Toomey, CBE, Colonel of the Rifles.

The Rector of Wimborne Minster, the Rev’d Vanessa Herrick also welcomed a congregation to the dedication of a new war memorial plaque commemorating Wimborne men killed on active service since 1945.

In her welcome the rector spoke of the town council bearing the full cost of the memorial rather than simply meeting the requirement of the War Memorial Act of 1923.The mayor and the president of Wimborne Royal British Legion then unveiled the plaque, engraved with gold lettering on slate. Beautifully made by James Case of Minster Stone Memorials it replicates the style of the adjacent 1939-45 plaque and says:

The Wimborne chaplain to the Royal British Legion, the Rev’d Alan Davies dedicated the plaque and while remembering the three Wimborne men commemorated, he also spoke movingly of the ongoing sacrifice of our young service people who work bravely to defend our freedom. He reminded those present that since 1945 members of our Armed Forces have been on active service during every year except for 1968. The dedication ended with a prayer and the names of the fallen.

The memorial exhortation was followed by a minute silence and a closing prayer.

The Rifles then returned to Allenview car park where the Rifles Bugles and Band sounded retreat with a music and marching display.