From the Capital to the Coast 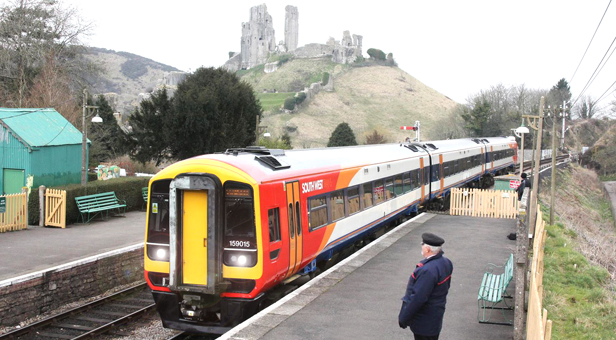 A special day excursion train from London to Corfe Castle and Swanage – bringing in 300 passengers to boost the Isle of Purbeck economy – is to make history this weekend, thanks to the volunteer-run Swanage Railway working in partnership with SouthWest Trains and UK Railtours.

It is the first time that SouthWest Trains has supplied a train and crew for such a charter which runs from the Capital to the Dorset coast via Woking, Basingstoke, Southampton and Bournemouth on Saturday, 29 June, 2013, and is being organised by UK Railtours of Hertfordshire.

Aptly named the ‘Purbeck Adventurer’, the day excursion from London to Swanage is using two three-coach Class 159 diesel trains coupled together which normally run on the busy London to Exeter main line and carry commuters between Salisbury, Southampton and Romsey.

To accommodate the six-coach ‘Purbeck Adventurer’, the Swanage Railway has fully restored its bay platform No. 1 at Swanage station – the second platform being used for train services to the main line at Wareham from 2015.

Saturday’s special excursion train from London will make history when it is the first passenger train from Wareham to use the bay platform at Swanage station since Sunday, 4 September, 1966, when regular British Rail steam trains on the branch line came to an end.

‘The Purbeck Adventurer’ will also make another piece of railway history when it becomes the first train from London to use the bay platform at Swanage since the Victorian station opened in May, 1885.

Swanage Railway Company chairman Peter Sills said: “Everyone is delighted and very excited this excursion train from London because such trains were regular visitors to Corfe Castle and Swanage from the opening of the branch line in 1885 through to 1969 when British Rail stopped running such trains.

“We are very pleased to have been working very closely with SouthWest Trains and UK Railtours to bring about another step forward and make this a success by using our main line connection near Wareham to  bring 300 people from  London to Corfe Castle and Swanage to enjoy an afternoon in the heart of the Isle of Purbeck and benefit local businesses.”

SouthWest Trains testing trains on the Swanage Railway – the same class of train that will be running from London on Saturday. © Andrew P.M. Wright.