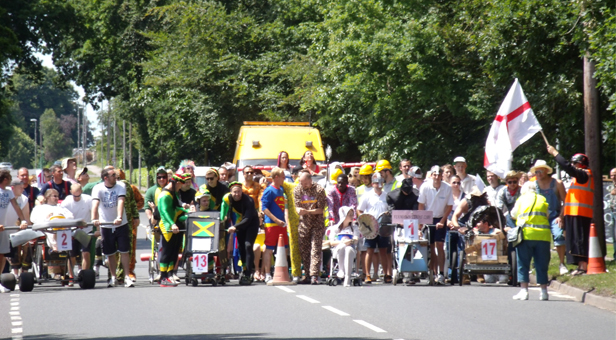 Competition was fierce as teams gathered at the Old Thatch on 29 June for the inaugural Ferndown Pram Race organised jointly by the Town Council and the Chamber of Commerce.

What some thought would be a stroll in the park, ended up as a closely fought battle with the winners completing the course from the Old Thatch to the White Heather, via the Pure Drop, Nightjar and Barrington Centre in under half an hour.

Crowds, several thousand strong, cheered the competitors as the weird and wonderful entries flew past. Spectator, Miriam Biggs from West Moors said, “There were more entries than I expected. It’s really good to see people getting involved with the community.”

The finish was spectacular with Cool Runnings (Ferndown Locomotives football team) getting the checkered flag, only to realise they were a team member short. In a heartbeat, the Flying Helmets (Ferndown Fire Station) also crossed the line, also one member short. To the chagrin of Cool Runnings, it was the Flying Helmets who pulled it off and stole first, leaving a rather dejected Cool Runnings’ team member to come in behind. Not long afterwards the Hillbillies made it into third place and The Nightjar came in fourth.

There was a great spirit during the event, and the only mishap was Jonah and the Whale – one of the three entries from Ferndown United Church, lost a wheel, (rumoured to have happened outside the church) and didn’t finish. They were rewarded with the wooden spoon.

Chairman of the event, Cllr Tony Brown said, “I think it was a huge success. It was lovely to see so many people in Ferndown on a Saturday afternoon and lovely to see all the businesses so busy during the week. I’d like to do it again and the feedback I’ve had so far shows there is great interest already.”

Editor of 4Dorset and Viewpoint magazine said, “mags4dorset’s Press Gang put in a huge effort with their pram, which is now listing heavily to port. They came a respectable 10th and got a really loud cheer as they arrived in Penny’s Walk. It was the most memorable event I’ve ever witnessed in Ferndown town centre.”

On Facebook, chamber and council members agreed that the Pram Race had certainly put fun into the town and had given birth to Fundown.

Other Facebook comments: STUART WAYMENT: “Well done Tony Brown for inspiring and organising” ANDY SMITH: “brilliant day tony, super organisation as always by you and the team.. we will be back next year to take our place at the top of the podium.. team cool runnings”  LISA THOMAS: “It was a great day … much fun and silliness had by all”  SEAN GIRDLER: “We will return with a pram that goes in a straight line and 2 guys who will work on their fitness levels!!!”