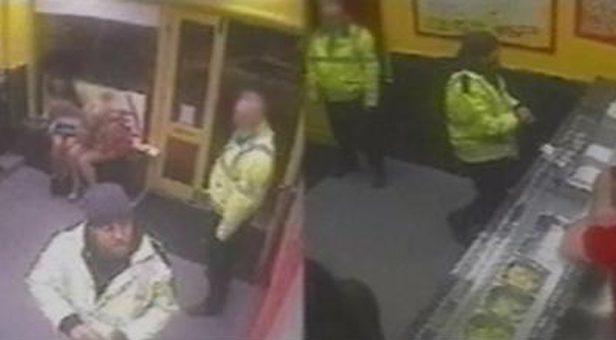 Detectives in Bournemouth continuing to investigate a serious assault that occurred outside a fast food takeaway shop in Bournemouth – have released moving CCTV footage.

The incident, in which an 18-year-old man from Poole was attacked by two unknown men, happened outside Snappy Tomato Pizza on Exeter Road at around 4.05am on Friday 14 December 2012.

The victim suffered a fractured jaw after being punched in the face.

Detective Constable Caroline Craft, of Bournemouth CID, said: “The victim had been on a night out when he was subjected to this unprovoked attack.

“His injuries were so severe he required surgery in hospital and to date we have not been able to identify the offenders.

“I am now able to release moving CCTV footage in addition to the still image originally sent out which I believe can help with the investigation.”

One of the men in the CCTV image is described as a white man in his 30s, five feet eleven inches tall of stocky build, unshaven with long dark hair worn in a ponytail. He is wearing a woollen hat, fluorescent jacket and black trousers.

Another man is described as short, of stocky build and balding. He is also wearing a fluorescent jacket.

DC Craft continued: “I urge the people in this picture or anyone who can identify them to come forward and speak to the police. All calls are treated in the strictest confidence.”

Witnesses and anyone with information should call Dorset Police in confidence on 101 quoting incident number 14:373. Alternatively, call the free and anonymous Crimestoppers line on 0800 555 111 where mobile phone tariffs may apply.