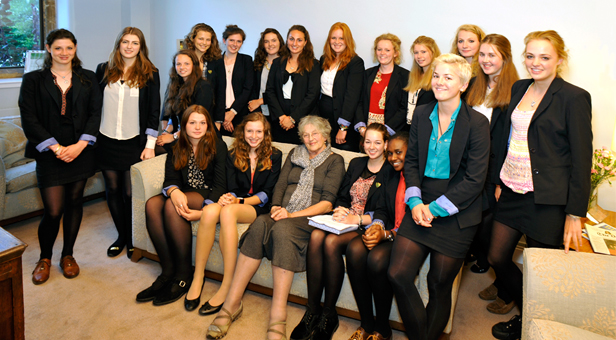 Germaine Greer with sixth-form students from Sherborne Girls in Dorset

The Australian-born academic and feminist Germaine Greer was the latest in a growing list of strong inspirational speakers to visit Sherborne Girls in Dorset.

The author of The Female Eunuch, which became a bestseller in 1970, delivered a speech on The Disappearing Women – how with “each stage of their lives, as they become successively wife, mother, mother-in-law and grandmother, women  become less visible.”

Sherborne Girls headmistress Jenny Dwyer said: “We have a tradition at Sherborne Girls of welcoming strong speakers to the school and I know the girls were very interested to hear Germaine Greer’s views as a leading feminist voice of the 20th century. From the role of women in the boardroom to the perception of elderly women as invisible in care homes, the talk was both lively and thought-provoking, and will hopefully inspire much classroom discussion.”