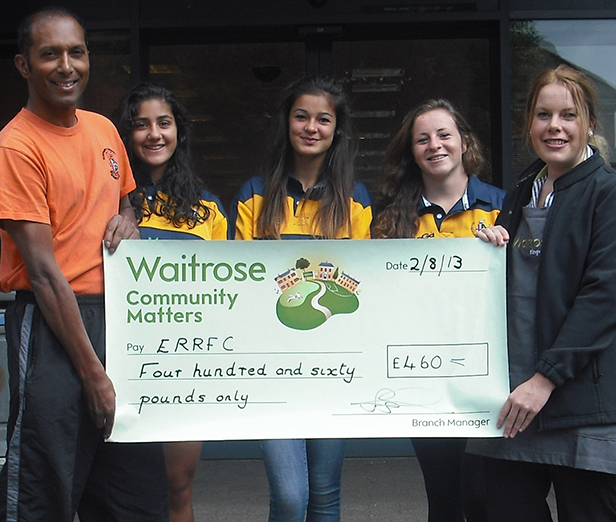 The Ellingham & Ringwood under 15s girls’ side received a welcome boost  when they were awarded £460 from the Waitrose Community Matters scheme.

The team enjoyed a great deal of success last season winning the RFU South Coast League – and were delighted when Sophie Carey was selected in May for the England Talent Development Group. Lizzie Dodd and Phoebe Murray also represented London & SE Division and a number of their players, including Evie Karkera, also represented Hampshire.

Katie Jones from Waitrose said, “We aim to make grants of £12,000 a year to local organisations through our Community Matters scheme and our customers vote on a monthly basis to help us decide who receives these grants.” She added, “We were delighted that we were able to support Ellingham & Ringwood as they are a great local club and their women’s and girls’ sides have a fantastic reputation both locally and across the country.”

Raj Karkera, the club’s under 15’s girl’s coach said, “We’re delighted to receive this generous sum from Waitrose and we’d like to thank all of their customers who voted for us.” He added, “We’ll be using the grant to buy some equipment and pay for some training courses for our volunteers who give up so much of their time to support us.”