Going for gold at auction 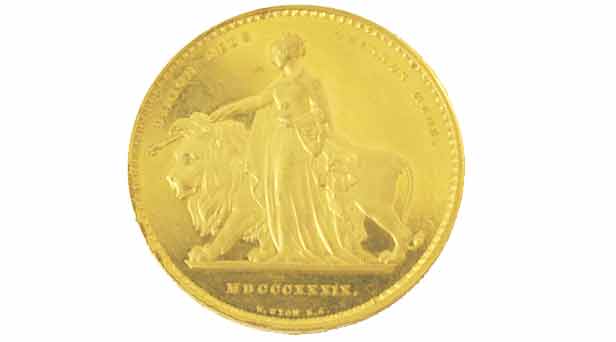 A scarce Victorian gold coin is set to be a highlight in Lawrences’ Spring Collectors Sale.

“It is a very rare 1839 Victoria ‘Una and the Lion’ £5 gold piece,” says Lawrences’ specialist, Jeff Day. “Too valuable to be circulated, it was struck only in `proof` and was issued only in expensive commemorative sets. It was produced in nine different variations and our coin is one of only 400 ever minted. The coin was designed by William Wyon to commemorate the beginning of Queen Victoria’s reign, and it is recognised as one of the most beautiful British coins ever produced.”

The young Queen, in the guise of the classical figure Una, is shown leading the British lion. It was the first time that a fictional character had been used to depict a monarch on a coin and the energy of the lion contrasts cleverly with the peace and grace of the Queen.

Entered for sale by a West Country client, the coin is expected to realise £12,000 – 15,000 in auction. Jeff Day comments, “Gold coins continue to do very well at auction, with many collectors and investors keen to add to their collections. Gold remains one of the most reassuring commodities in a changeable market such as this.”

It will be sold in Lawrences’ two day Collectors Sale on the 23 and 24 of May, in a large section of Coins, Medals and Militaria. For further enquiries please contact Jeff Day on 01460 73041.