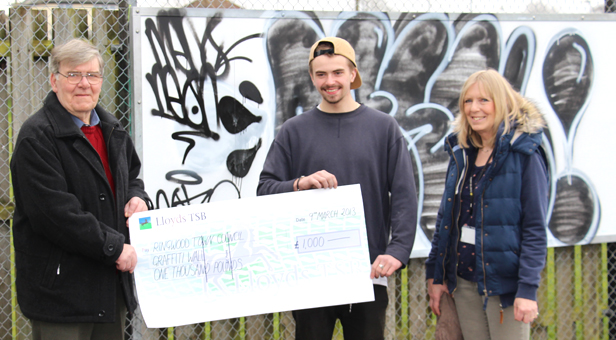 Graffiti on walls and garages around Ringwood could become a thing of the past as an initiative by Rob Moody, and supported by Ringwood Town Council, comes to fruition.

Some months ago, Rob suggested that if a graffiti wall could be provided within the town to give young people a canvas for their art, this would reduce unwanted graffiti elsewhere.

Subject to being able to find sponsorship, the town council agreed to provide a wall within the skatepark at Carvers.

A local businessman came forward to sponsor the graffiti wall and said, “Everyone moans about young people and the activities they get up to.

We were all young once and I think this initiative by the young people themselves deserves support.

I am delighted to be able to sponsor the wall and hope that the young people get many hours of enjoyment from its use.”

The graffiti art will be controlled by the young people themselves and will remain in place on condition that it will not contain offensive drawings or words.

If either appear, the town council reserves the right to paint over the offending material or remove the wall altogether.