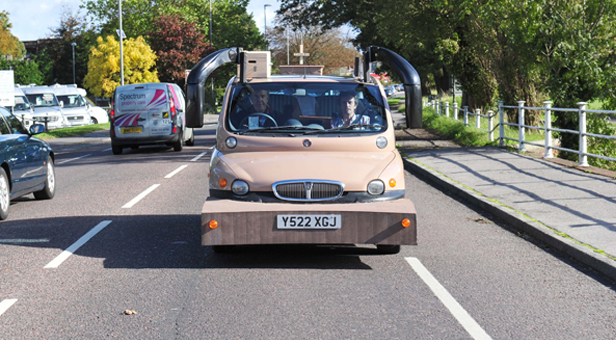 Bringing with it a distinct smell of mothballs, another casualty from the new series of BBC Top Gear has been wheeled into Beaulieu for some rest and recuperation – turn up your hearing aids and dig out those walking sticks, the Grannymobile has arrived!

Mindful of Britain’s ever-growing pensioner population, Jeremy and Richard took it upon themselves to convert a Fiat Multipla into their idea of how a car for old people (such as co-presenter James May) should be, and it is that very vehicle which is now on show at Beaulieu.

The rather, erm, stunning bodywork is painted in the exact same colour as a hearing aid, the front bumper is greatly extended to accommodate all those little knocks and scrapes in the bingo hall car park, and the Fiat badges have been replaced with Rover ones to make the car more familiar and less, you know… foreign. The interior has also been thoughtfully re-designed with useful features such as a flask holder, a recalibrated large print speedometer and waterproof front seat covers to cater for those, ahem… little accidents. The rear seats have also been replaced with Shakletons easy chairs because they are, quote: ‘so easy to get in and out of, you know’.

Once the modifications were completed, the pair took the car out for a test run in the countryside to see what the pensioners of Christchurch thought, stopping along the way for a game of bingo and a nice cup of tea. Having survived the ordeal… just… well, with a few slight alterations, courtesy of Jeremy’s over-exuberant slip road warning system, the vehicle is now having a nice rest in the World of Top Gear at Beaulieu and welcomes visitors between the hours of 10am and 5pm.

The Grannymobile joins a whole host of cars at Beaulieu created by the Top Gear presenters for some of their most ambitious challenges. Another recent addition is the P45 micro car, also from the latest series, driven by Jeremy on an eventful trip along a dual carriageway, and through the corridors of a shopping mall and the British Library.

The ‘Enormodrome’ recreates the feel of the Top Gear studio with regular features from the programme, including the Cool Wall and the Celebrity ‘Lap Times’ board, kept up to date in line with the show. Visitors can also watch behind-the-scenes footage of the Top Gear production zone and clips of some of the best Top Gear moments.

World of Top Gear can be seen as part of a visit to the whole Beaulieu attraction which also includes the National Motor Museum, BOND IN MOTION, Palace House and Beaulieu Abbey.

Beaulieu is open every day, except Christmas Day, from 10am. For more information telephone 01590 612345 or visit www.beaulieu.co.uk