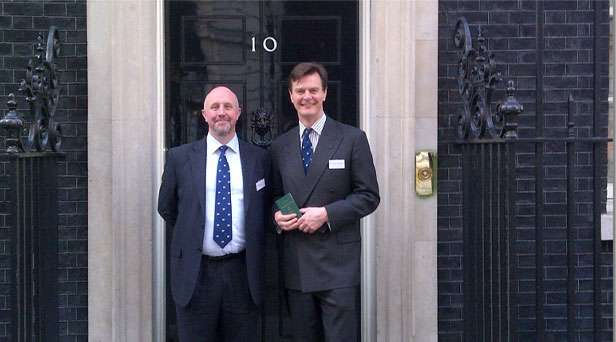 On 23 April, two of Hall & Woodhouse’s directors – Anthony Woodhouse and David Hoare – attended a reception at No 10 Downing Street. The function was held for major supporters of Naomi House and Jacksplace (hospices for children and young adults) and was hosted by Samantha Cameron.

The teams and guests of Hall & Woodhouse’s public houses and brewery have raised more than £200k in the last two years to support Naomi House and Jacksplace in providing care to life-limited children and young people across the south of England.

Mrs Cameron expressed her thanks to all at Hall & Woodhouse for their hard work and enthusiasm in raising such a magnificent sum.   Anthony Woodhouse said “It was very kind of Mrs Cameron to host this reception, David and I felt very honoured to be representing Hall & Woodhouse’s team and guests who actually did all the hard work of fundraising.   It was just a pity we couldn’t get invitations for all of them.”

Every year the team members at Hall & Woodhouse vote for a charity for the company to support.   For the last two years this has been Naomi House and in May, the new charity Hall & Woodhouse will be supporting for 2013/14 will be announced.