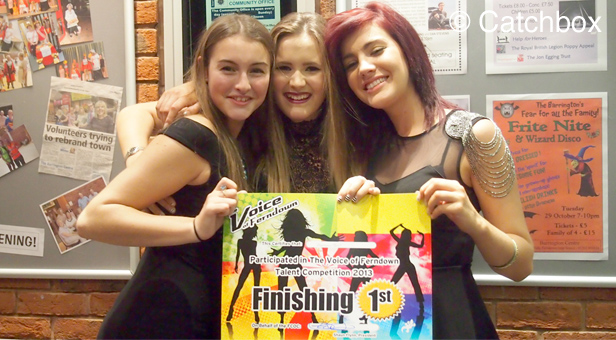 After a captivating final at the Barrington Theatre, the town of Ferndown has chosen the winner of its first talent contest ‘The Voice of Ferndown’.

Harmony Twist, a stunning trio from Poole excelled and won the judges’ votes after singing Ed Sheeran’s ‘Lego House’, but what a close finish.

Piano man, Matt Black, one of the judges and main sponsor of the event said, “We used a points system and out of a possible 200 for each act, it came down to only a few points between the top four. It was very close.”

In second place was Katharine Levi. Her performance of Aretha Franklin’s ‘Don’t Play That Song (You Lied)’ was ambitious, but geez did she pull it off. Punchy, exciting and sassy, she hit the spot, and the audience loved her. “Because you enjoyed it, it was infectious and everyone enjoyed it,” judge Matt told her. Judge Steve Lugg added, “I wanted to dance. Absolutely fantastic.”

Samantha Stevens scooped third with a polished ‘Don’t Rain on My Parade’ (Funny Girl). With a plethora of fast phrases, Samantha’s voice bounced around the tempo changes exactly as the song intended. If you know the song, you’ll know the last note and boy did Samantha have the Streisand factor. “I was mesmerized,” said judge Tara Nix. “It was more like watching a show. The whole package was really amazing.”

In contrast, stand out Amber Marie Thorne had an angelic and pure voice. She also had a great following in the audience from the Phoenix Music Society. Judge Richard Sidaway said Amber’s performance started the moment she walked on stage. “Fantastic, absolutely beautiful.” A West End performer himself Richard added he would have liked to have heard more “light and shade” in her voice. Judge Steve added: “Amber transfixed me.” She was placed fourth.

The event, organized by the Chamber of Commerce in collaboration with the Barrington Centre, was not to be missed. It outstripped ‘Britain’s Got Talent’ and ‘The Voice’ by a long way (it wasn’t padded out with repetitive hype – so prevalent on television these days). Also, the performers were local people each with an amazing gift and deserving of recognition. Ferndown gave them the opportunity to showcase their talent.

The eight acts that appeared in the final had been voted through by the public, so the judges weren’t sure who they were going to see on the night, which made it all the more exciting.

The event was MC’d by Jacqui Sutton, (chair of the Barrington Centre’s Up-Fronters committee), and Shaun Flynn, (local businessman and president of Ferndown Chamber of Commerce). Without time for rehearsal, they moved the evening along with the sort of rapport and good humour that would be envied by the Eurovision Song Contest. The Mayor of Ferndown, Cllr John Lewis presented the winners with their prize and certificates to all contestants.

Matt Black, who put up a prize of a recording session at his Hangover Hill studio said, “It’s been a pleasure to be involved with the Voice of Ferndown and the Barrington Theatre is a brilliant venue. It’s good for acts to win on a stage of this calibre and it lends a lot of prestige to the event.”

He sees the winners, Harmony Twist, going a long way. “They have got incredible talent.”

Among the prizes, the girls, Dannie, Liberty and Laura will also get a promotional shoot with professional photographer Donna Nicholson of Paradox Photography.

Harmony Twist were ecstatic with their win and mentioned to mags4dorset that they had auditioned for Britain’s Got Talent, but didn’t get through. “It was an amazing experience and we will do it again,” said Laura, her smile reflecting the joy of winning the Voice of Ferndown.

The rest of the acts were: 12-year-old Nicole McNally, Joe Webster, Linda Sambrook and Gareth Woodford. Each brought something really special to the stage. What a shame they couldn’t all have won, yet in their own way, they were all winners.