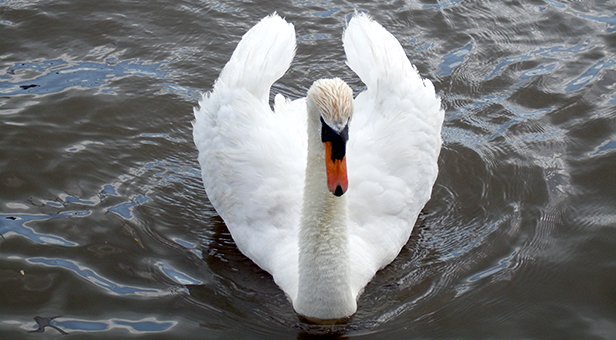 Police officers in Bournemouth are appealing for witnesses and anyone with information to come forward after two swans were attacked with a crossbow in the Muscliffe area of the town.

The incident happened at approximately 6pm on Wednesday 27 March at Throop Mill on Throop Road.

The two swans, a male and female pair, were shot at by someone using a crossbow seriously injuring both.

The RSPCA attended to try and catch the injured birds.

The male was caught and received veterinary treatment for an injured lung, but the female could not be caught and died from her injuries two days later.

Police Constable Claire Dinsdale, Wildlife Crime Officer at Poole police, said: “This is an atrocious act, and following further investigations, I am now able to release some details of a man we would like to speak with.

“He was seen in the area of Throop Mill at around 6.15pm and has a very distinctive appearance.

“He is around six feet tall, of solid build, aged in his late forties, and had a tanned, weathered face and dark hair.

“He was wearing a black baseball cap, and a black or dark coloured leather jacket with red piping.

“He was carrying a black crossbow, which also had red piping on it and appeared to almost match the clothing he had on.

“I am appealing to anyone who may have seen this man in the area at the time of this incident to come forward and contact police in confidence.

“I believe he would have been seen by members of the public as the location is very popular with dog walkers and fisherman.

PC Dinsdale continued: “Swans are crown property and therefore killing or injuring them is a serious offence.

“It appears the mill itself has also been shot at causing damage to the windows.

“Anyone who may have witnessed the attack take place or can help us further with our enquiries is urged to call the non-emergency number 101.”

Witnesses and anyone with information should call Dorset Police in confidence on 101, quoting incident number 31:177 Alternatively, call the free and anonymous Crimestoppers line on 0800 555 111 where mobile phone tariffs may apply.