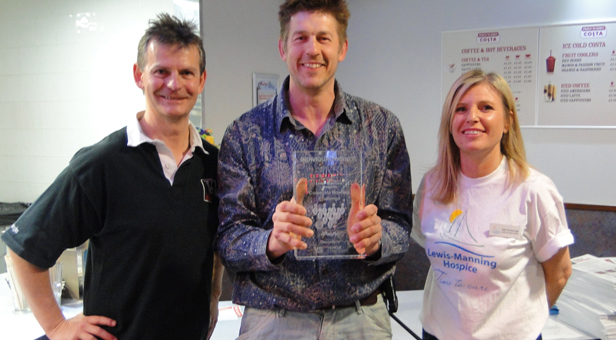 Lewis-Manning Hospice is celebrating the recent success of its first ever Corporate Bowling Challenge event, which raised over £2,500 for the charity at Bowlplex in Tower Park, Poole.

Sponsored by Bowlplex and Vehicle Strategies, the corporate challenge and networking event sold-out in just over a week and saw a total of 200 people from 26 local companies compete for team and individual trophies across 24 bowling lanes. The team title finally went to MEH Construction and their owner Magnus Harding also won the individual title with an impressive score of 184.

Lewis-Manning Hospice has also revealed that event sponsors Vehicle Strategies have pledged to donate to the charity for every new or used vehicle bought through their sister company Motorhound. Vehicle Strategies, whose co owner Jeff Lester was recently diagnosed with prostate cancer, are continuing their support to Lewis-Manning Hospice by donating £100 for every car or light commercial vehicle purchased through them, when customers mention Lewis-Manning Hospice during their initial enquiry. Motorhound supplies new and used cars either through outright purchase or personal or business contract hire.

Vehicle Strategies co owner Jeff Lester said, “After being diagnosed with prostate cancer it spurred me on to be more proactive rather than reactive and I could see how we as small business could see a great return on investment, generate new business and support a great local charity.”

With all proceeds going to Poole’s Lewis-Manning Hospice, which provides free care to local people with cancer and other life-threatening illnesses, there are already plans to make the Corporate Bowling Challenge an annual event following its successful debut.

Paul Tucker, Marketing and Communications Officer at Lewis-Manning Hospice said, “The response and support was absolutely phenomenal and we were overwhelmed with the sheer number of local businesses who wanted to get involved. The event was a great social networking event with an element of team spirit and competition which was great fun and saw many teams vowing to return and win the converted title. We were thrilled with the amount of money raised and can’t wait to do it again.”