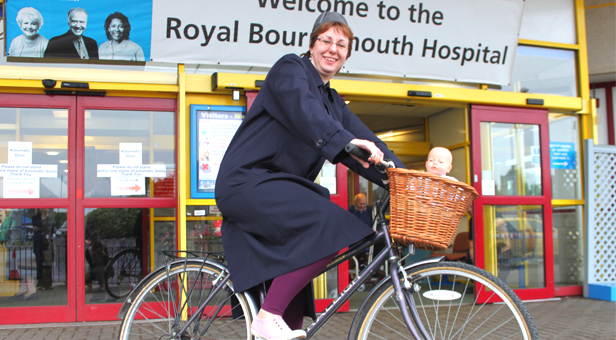 The atrium of the Royal Bournemouth Hospital was abuzz with activity yesterday as patients, the public and staff took part in the annual open day.

Visitors found out about the different services available at the Trust and got involved with the interactive displays hosted by a range of departments.

Director of Nursing and Midwifery, Paula Shobbrook, presented the Interactive Exhibitor Award to Maternity Services, whose stand explored midwifery through the ages. Midwife Julie Horn dressed up like Miranda Hart’s character Chummy from popular BBC1 drama Call the Midwife and donned her bicycle while other members of the team talked to people about different birthing methods and breastfeeding.

Visitors were also able to get basic health checks, such as blood glucose levels and blood pressure levels, and could try on a number of glasses which showed what it would be like to have a range of eye conditions. Meanwhile five consultant-led health talks took place in the chapel, giving attendees an insight into a range of subjects from hip arthritis to medicine and the new media.

Other displays explored how the Trust prepares for a major emergency, the use of prosthetic limbs, rehabilitation services, and how the Trust strives to promote health in its role as a member of the international network of Health Promoting Hospitals.

Friends Jessica Montgomery and Abby Austin, both from Jersey and currently studying at Bournemouth University, attended the Open Day and praised the interactive stands.

Jessica said: “The day has been great, more hospitals should do this. It’s great that we can see the health options available to us and also to get an understanding of the problems people face and which we might face in the future.”

Abby added: “All the stands were really interesting and very informative. I think they would take a lot of people’s fears away. They also gave me a greater empathy of the different illnesses people have to deal with. We’ve really enjoyed