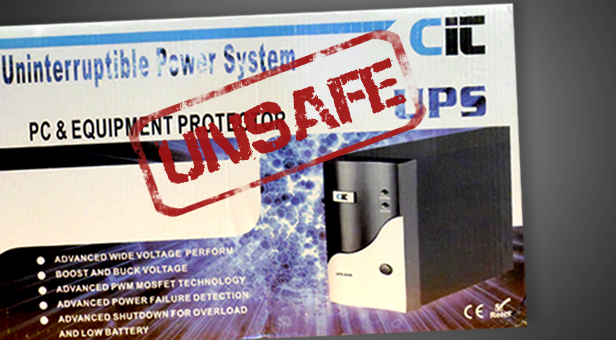 An importer has been ordered to pay out more than £9,000 for distributing faulty power cable devices, following an investigation by Dorset County Council's trading standards service.

An uninterruptible power supply is designed to be plugged into the mains. The user can plug items, such as computers, into it to protect from a sudden loss of electricity.

A One Distribution Ltd had imported the item from China and it was later sold by a third party to a consumer in Dorset. But the consumer found that its plugs could easily fall out of the sockets and alerted trading standards.

The UPS was sent for testing by David Tingey of Electrical Safety Assessments Ltd who found that it had unsafe sockets, an insufficiently strong power cord, an unsafe plug with a false kite mark registration number and no rating label. In relation to the sockets he said, “The plug had a tendency to fall from its position, breaking the electrical continuity. To maintain this, the plug needed to be carefully positioned such that there was contact with both the live and neutral contacts. During this process arcing could be heard between the plug pins and the socket contacts. A poor connection between these could lead to arcing and burning.”

The court heard that the company had imported the items and mainly relied on tests carried out by an independent test house in China. The tests appeared only to relate to a product designed for the European market and not for the UK. There was no evidence of any testing on the item when fitted with UK sockets and a UK plug. The company had evidence of a limited examination of the product on receipt in the UK but this was found to be insufficient and failed to identify the problems with the item, some of which were fairly obvious.

The company was fined £2000 for each of the three offences and ordered to pay £3334 costs plus a £15 victim's surcharge.

Richard Herringshaw, Dorset County Council’s principal trading standards officer said, “This case illustrates how important it is for importers to ensure that all the goods that they sell are safe. While we accept that the company reacted well when the problem was brought to their attention, it is clear that with a little more vigilance by the company, it would never have been sold in the first place. Any business seeking to import items for sale to consumers in the UK are strongly advised to seek advice from their local trading standards service.”

Anyone who thinks they may have bought an unsafe item should contact Citizens Advice on 08454 040506.

The maximum penalties for offences under these regulations is £5000 per offence.