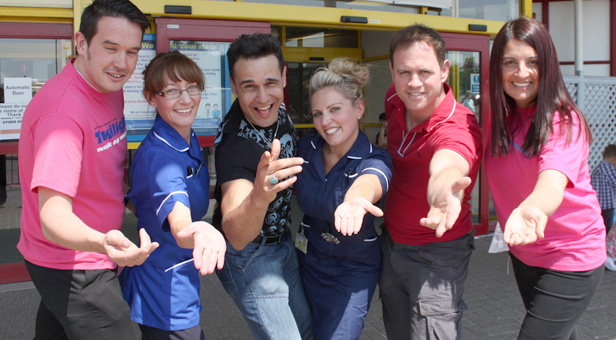 Lindsay Baker, Clinical Leader of Ward 10, gets involved in a classic ice skating lift with Chico and Kyran Bracken

The hospital clock turned to Chico time on Thursday 6 June as the former X Factor star and rugby legend Kyran Bracken visited RBH to find out more about the proposed Jigsaw Building.

The pair visited the Cancer and Blood Disorders Unit and chatted to patients and staff. They heard about the brand new Cancer and Blood Disorders Unit that will be a key feature of the 2000m2 Jigsaw Building to be based at the hospital. The building will bring together oncology, haematology, gynaecology, breast care and early pregnancy in two new units.

Chico and Kyran will both be appearing in the skating show Celebrities on Ice, taking place at the BIC in Bournemouth from 14-16 June. They donated two pairs of tickets for the show which were raffled off to staff to raise funds for the Bournemouth Hospital Charity. They also gave away a number of tickets to patients.

Lindsey Sturman, Fundraising Manager, said: “We were thrilled when we heard that Chico and Kyran Bracken wanted to support the charity and the hospital. They were great fun and brought a smile to the nurses and patients on wards 10 and 11 who loved meeting them.

“The duo couldn’t do enough and they were both interested in hearing about the exciting plans for the Jigsaw Building.  We really appreciate the time they took out of their busy schedules to come and see what we are doing.”