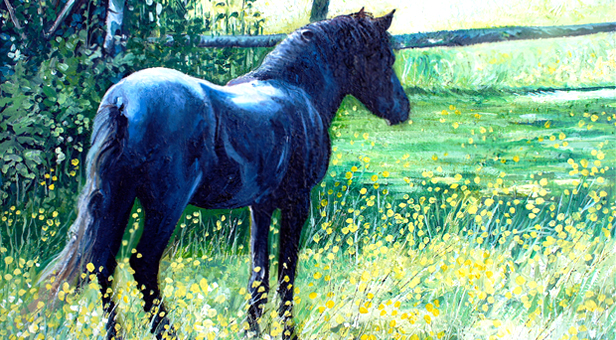 His painting ‘Just Standing,’ (pictured) was inspired from his love of natural landscapes and importantly the flora and fauna of the New Forest area.

The vote recognizes him for a style he loves, yet he is probably much better known for his comical caricatures and cartoons.

Danny’s first cartoons were published when he was only 15. In his first job he was a visualizer in the advertising world and created storyboards for TV use, later becoming the political cartoonist for ‘The Sunday People.’

“I’ve also had many greeting cards and Christmas cards commissioned, not least for Marks and Spencer and the late HRH Princess Diana,” he says.

With six books under his belt entitled, ‘Danny gets to grips with…’ his artistic skills are many and varied. However his true passion, he says, is painting landscapes, equestrian themes and portraits in oil and watercolours.

Of ‘Just Standing’ he says, “It was painted in a looser style which I am trying to develop further for painting outdoors.”

Inspired by artists such as Munnings, Spencer and Hogarth and from farther afield, Rembrandt, Velazquez, and Goya, Danny has been a member of the Society of Equestrian Artists for the past 15 years, winning Best Painting in 2011.  He has also exhibited at many leading galleries in the country.

Despite his fame, the local accolade means a great deal to Danny and has filled him with pride, “I am delighted that ‘Just Standing’ was nominated as the people’s choice,” he says.