Kids get creative with cakes, celebrities and car washing to raise money for Upton Heath 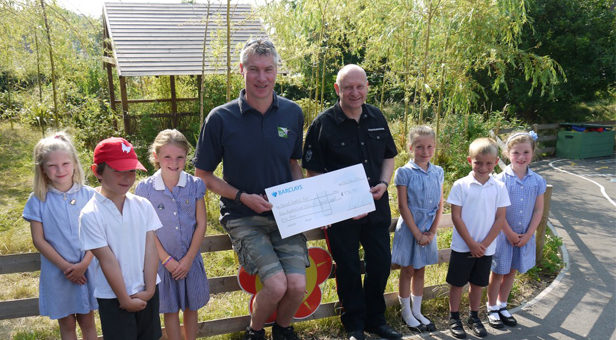 School children at Upton Infants School have chosen Dorset Wildlife Trust’s ‘Upton Heath’ nature reserve as their charity appeal of the year, and have raised £936.90 to help DWT continue its conservation work on the heathland.

Whilst spending time learning and playing on the heath, school children from Upton Infants School were inspired by the conservation work DWT have already done, particularly since the devastating fire of 2011, to protect and restore the huge variety of wildlife that lives there.

Daniel Williams, Deputy Headteacher at Upton Infants School, Poole, said: “Upton Heath is a valued local wildlife area, one which many of the children use on a regular basis, and it was an easy decision by the children to support this local treasure. The fundraising has helped children gain a greater awareness of Upton Heath, which will stay with them for many years to come and lead to a generation of Upton school children with an increased passion for their local environment.”

As well as a car wash and cake sale there has been a fantastic response to children’s letters to celebrities and public figures, asking for memorabilia to auction, in the name of Upton Heath. Daniel Craig, David Cameron, Brian May and Sir David Attenborough were just a few of the big names who sent signed pictures. Other items on offer included two original Pink Floyd tour posters from the 1970s and a signed LP from English rock band Galahad, who also performed one of their songs at the cheque presentation at the school.

Nigel Brookes, East Dorset Warden for Dorset Wildlife Trust, said: “I was delighted to accept the cheque on behalf of Dorset Wildlife Trust from Upton Infants School. It’s great to see young people engaging with wildlife in their local area. The work DWT has done on Upton Heath since the fire is a great example of how important it is to manage land properly – we still have a lot of work to do, but with an army of volunteers and continued support from the local community, we have made important steps to re-build the fragile habitats which were damaged by the fire in 2011.”

Over a third of Upton Heath was destroyed by fire in 2011, which caused devastation to the rare and precious wildlife which was in abundance there. Through the support of public donations of over £50,000 and a generous donation of £119,778 by the SITA Trust, DWT have been able to start work on restoring the burnt areas and a newly acquired section of the heath. On-going management of Upton Heath is supported by SITA Trust, and thanks to volunteers, college groups and corporate groups, DWT have been able to carry out tasks such as clearing invasive shrub.