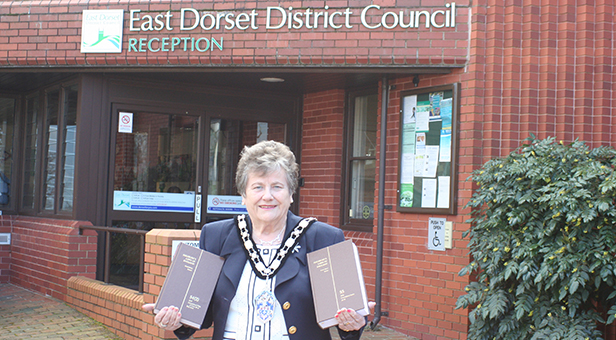 East Dorset District Council is donating more than 100 legal books to be used by law students and legal professionals in Zambia.

The Chairman of East Dorset District Council, Cllr Lucy Clark officially handed over seven boxes of books from the Council Offices in Furzehill.

The books, which include a complete set of Halsbury’s Laws of England, will now be sent to Lusaka, the capital of Zambia, before being distributed to charities, law students and public libraries.

The books are no longer needed by the council, which has been increasingly accessing legal information online as part of efforts to be more sustainable, and so were offered to a number of charities and organisations.

Linda Kalinda, who runs a campaign to send unwanted law books to Zambia, organised for the books to be collected and sent out.

Ms Kalinda said: “I would like to thank East Dorset District Council for the donation of these legal books to Zambia. They will go a long way to improve the standard and quality of law students and graduates, and ultimately will contribute provision of effective legal services and access to justice. Thank you again for your generosity.”

Chairman of East Dorset District Council, Cllr Lucy Clark said:  “The council is delighted to be able to donate these books and we are pleased to see them going somewhere where they will be put to good use.”