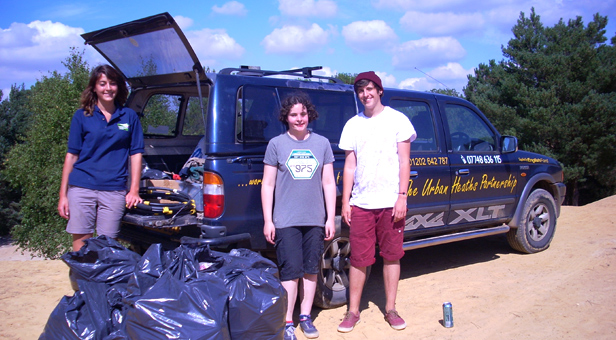 Dorset Wildlife Trust (DWT) has teamed up with Urban Heath Partnership (UHP) to tidy up the heath mountain bike hotspot, better known as the Pits, after a summer of fun and sun. Armed with cakes and biscuits donated by the local Co-operative in Upton, DWT and UHP were joined by local young people and together managed to clear a shocking amount of litter from the site, most of which was plastic bottles.

The Pits are a remnant of Upton Heath’s former life as a brick works, being an area excavated for sand and other materials. Because of its unique form, the site has always attracted a lot of interest for its biking potential despite being at the centre of Upton Heath Nature reserve. As a national stronghold for the incredibly rare smooth snake and sand lizard, Upton Heath allows the use of bicycles along the public bridleways where they will not disturb any of the special wildlife in this particularly vulnerable habitat. The use of motorbikes on site is however illegal. Throughout the summer Upton has been buzzing with bike activity that has sadly left the Pits full of litter.

Claire Platten, UHP Area Warden, said: “It’s sad to think that those who benefit the most from this part of Upton Heath also cause a lot of the litter. It was really refreshing for us to see young people giving up their time to help us clean up the site, not only for the benefit of the unique wildlife there, but for the benefit of other people too. This has been yet another in a series of successful end of summer litter picks and was well received by those who frequent the area, but there is still a lot of work to be done to discourage littering on the nature reserve.”

Upton Heath Nature Reserve is managed by DWT which works closely with the UHP to minimise the urban pressures that threaten its vulnerable heathland habitat.