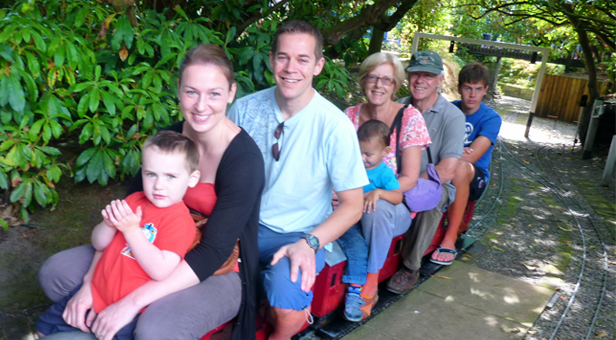 PHOTO: WORLDWIDE VISITORS ENJOY THE ‘MINIATURE’ RAILWAY IN LILLIPUT: James, Michelle and Andrew (from Surrey), Cubie (from Hong Kong), Janice and David (from Lilliput) and Sam (from Kenya) © Andrew Funnell

Lewis-Manning Hospice is on target to break its own fundraising record with Luscombe Valley Railway, having raised an impressive £5,297.80 when the popular local attraction in Sandbanks opened its doors to the public last weekend.

Luscombe Valley Railway have once again nominated to support the Lilliput-based charity, having done so previously three years ago, and now hope to smash the £10,000 total achieved in 2010. Richard and Connie Knott, have lovingly and meticulously assembled the railway collection, which includes a five inch gauge, ground-level, passenger-carrying railway, as well as a traction engine, steam lorry, full-sized steam car and a 26ft steam launch in the grounds of their home in Lilliput, Poole.

The couple run 4 charity events annually and have so far raised over £7,000 from the April and July events for Lewis-Manning, who offer free specialist palliative nursing care to hundreds of local people living with cancer and other life-limiting illnesses. There will be an Autumn Run on 7 and 8 September followed by an opportunity to meet Father Christmas on 21 December, with both events opening from 11am–4pm.