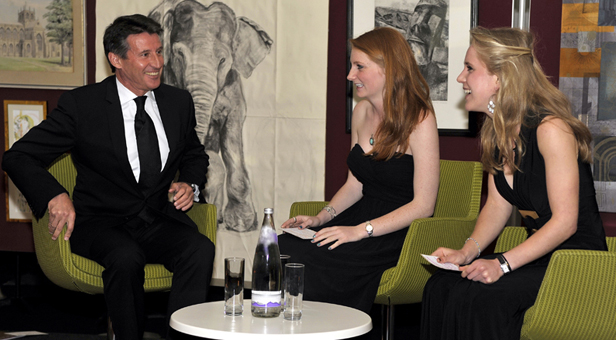 PHOTO: Lord Coe, Jane Nicholson (Sherborne Girls’ new Legacy Leader) and Heads and Vice Head of junior boarding house West, from left, Sophie Wurfbain, Olivia Andrews, Melody Lulu-Briggs and Holly Stephens, participate in the candlelight ceremony at the Candlelight Ball to mark the relaunch of the legacy campaign with the new title ‘Pass on the Light’ and the launch of the School’s new Candlelight Bursary Fund

Lord Coe was Guest of Honour at Sherborne Girls’ Candlelight Ball on Saturday June 22, which raised £31,548 for the Candlelight Bursary Fund, a new scheme that works in partnership with the SpringBoard Foundation and Kids Company. It offers fully funded places to girls for whom a boarding education at Sherborne Girls would be a life-changing experience.

The highlight of the evening was an interview with Lord Coe, who answered questions put to him by the two head girls, Pip Smith and Molly Mackean, which covered how he dealt with nerves prior to competitive races, his feelings before the Opening Ceremonies of the Olympic and Paralympic Games, his determination to ensure a proper balance of men/women in the organisation of the Olympic and Paralympic Games (51% were women) and his aim to see more women involved in management and coaching in sport.  He paid tribute to the wonderful spirit of the Gamesmakers – two of whom, Amanda Mackintosh and Hayley Vanstone, who are members of staff at Sherborne Girls, were present on the evening. Questions were then taken from the enthusiastic and fascinated audience.
The Candlelight Ball, which was held in marquees decorated in an Olympic ‘hint of gold’ theme was attended by 250 guests.
Laura Weston, Director of Development at Sherborne Girls, who co-ordinated the event, says: “Our target for the night was £30,000, so we are delighted to have exceeded that figure for such a worthy cause. Everyone worked really hard to ensure the Candlelight Ball was the success it was, and we are extremely grateful to Lord Coe for making it such a special and memorable evening. We recently found out that the school’s close links with the Olympics extend to our motto – “The prize is a fair one, and the hope great”, which is based on a saying by Socrates, and the school badge, which depicts a flaming torch and sprig of wild olive, representing the crown of the Olympic Games, which only goes to make Lord Coe’s involvement and the candle lighting ceremony even more fitting!”
Young pupils from Sherborne Girls’ new junior boarding house, Aldhelmsted West, took centre stage in a candle lighting ceremony presided over by Lord Coe as the evening also rekindled the School’s Legacy Programme under the new title “Pass on the Light”.
COVER PHOTO: Lord Coe interviewed by Head Girls Pip Smith and Molly Mackean
Category: DorsetJune 26, 2013