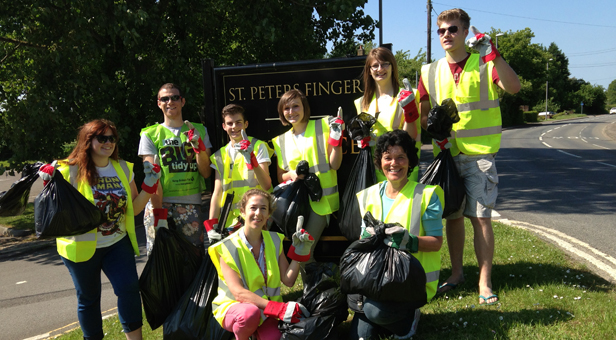 Staff  and regulars from all 54 Hall & Woodhouse managed public houses, from Dartmoor to Twickenham, went out into their communities to collect litter on 8 June.  The community litter pick event, named Founders’ Sweepers, was held for the third year running to celebrate the day Hall & Woodhouse was founded.

On Founders’ Day, 8 June 1898, George, Alfred and Frank Woodhouse made Hall & Woodhouse a limited company.  Every year the company celebrates this day, but this year celebrations were postponed for one week, as Hall & Woodhouse has just opened a new brewery on its existing Blandford site in Dorset.

David continues: “Last year we launched Founders’ Sweepers and it was such a popular event that we knew we had to do it again this year.  From hedgerows in rural Dorset to bustling streets in London, our teams did their best to keep their areas tidy. After all the hard work they rewarded themselves with a bottle of Badger beer and some Founders’ Day cake – well it is a birthday celebration after all!”