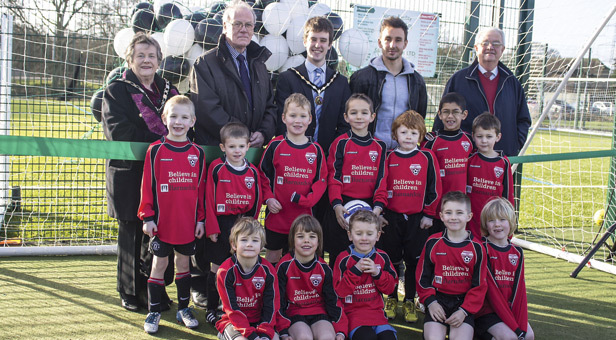 The new state-of-the-art 3G all-weather sports pitch, providing a football and rugby small-sided match and training facility, has been opened at Potterne Park in Verwood.

The facility was opened in dramatic style by Bournemouth FC player Matt Tubbs who kicked a ball at a specially-adapted goal releasing black and white balloons into the air.

The opening ceremony included speeches from Mike Fry, Chairman of Verwood Arts & Leisure Association (VALA), which will manage the pitch, and Cllr Spencer Flower, Leader of East Dorset District Council, which gave support for the building of the facility which was funded from the Verwood Contributions Fund.

The pitch is one of three new facilities being provided in Verwood following successful negotiations by the council to sell Verwood Leisure Centre to Morrisons for an extended supermarket. The sale has funded a new state-of-the-art 50-station gym extension which is now being built at Verwood Hub and a new sports hall which is under construction at the Emmanuel Middle School for use by the school and the public.

At the opening, Mike Fry said, “We are very pleased to receive this new facility. It will make a great difference, particularly to the younger players here. It has taken us a while to get here but, working in conjunction with East Dorset District Council and Verwood Town Council, it’s great to see it all come together.”

Cllr Spencer Flower added, “This has been a good example of partnership working between the District Council providing funding and support and the work of VALA and volunteers from the local community. The developments in Verwood will improve the sport and fitness facilities in the district and help us to meet our objectives to improve opportunities for young people in the area to live healthy and successful lives.”

Following the opening ceremony young players from Rossgarth Youth Football Club got a chance to try their skills in a competition shooting penalty kicks at Matt Tubbs in goal. The winner was Joe Buss who took away a football signed by players from AFC Bournemouth.