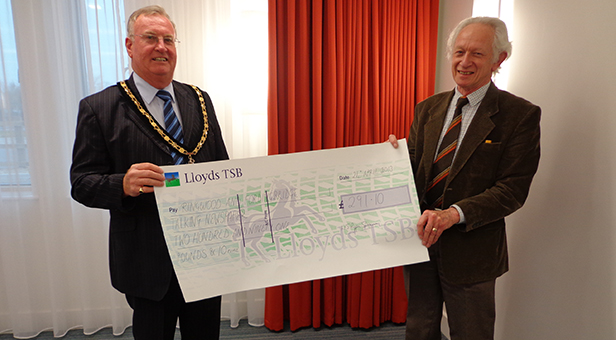 “For many years I believed that the loss of eye sight is the faculty that we would all miss the most.  It certainly would be the one that I would least wish to lose,” said the Mayor of Ringwood, Cllr Steve Rippon-Swaine as he handed a cheque for nearly £300 to his nominated charity. He added, ” When I was given the privilege of being elected town mayor and able to nominate a mayor’s charity, it gave me great pleasure to nominate ‘Ringwood & Fordingbridge Talking Newspapers’.  They produce on average 50 CDs for those with no sight every fortnight, and I am sure they bring great joy to their listeners.  It was therefore with great pleasure I was able to present to Mr Peter Ansell, from ‘Ringwood & Fordingbridge Talking Newspapers’, a cheque to go towards their running costs.”