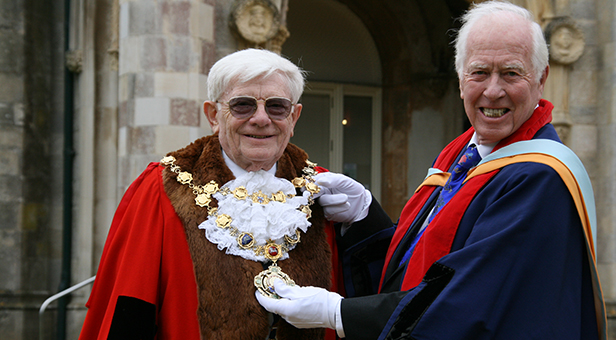 Cllr Lofts serves the Highcliffe ward and was elected to the borough council in 1987 and to Dorset County Council in 1989, remaining as a county councillor for 20 years. He served on the Police Authority and on the Dorset Pension Fund, where he is still a member representing the Dorset districts and boroughs. He has also served as a governor of both the Highcliffe schools and their predecessors for more than 20 years.  He was previously mayor of Christchurch in 1998/99 and three years ago he was appointed as an Honorary Freeman of the Borough.

He was born in Dartford, Kent in 1931 and joined the ITNT College, HMS Worcester in 1945 in order to go to sea as a career, which he did in 1948. After obtaining his Masters FG Certificate in 1957, he worked for the Post Office (later becoming BT) in the submarine cable business, retiring in 1985.  He then joined Fujitsu of Japan as a consultant until 2006.

John, his wife Muriel, and son Alan, moved to Highcliffe in 1976. Muriel passed away four years ago, but he still lives in Highcliffe.

Cllr Denise Jones was elected to serve as deputy mayor.