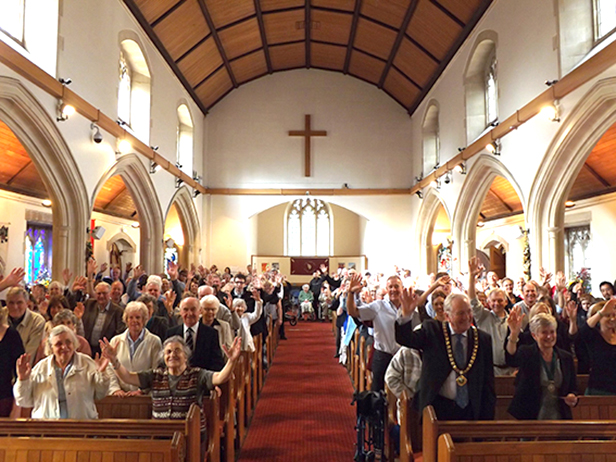 Anyone taking a closer look at the mayoral medallion during the recent 80th Anniversary celebrations last weekend (28 and 29 September) at St Mary’s Ferndown would recognise the image.

Speaking at a packed service on Sunday 29 September, the Mayor Cllr John Lewis remarked: “My mayoral medallion shows St Mary’s church as the symbol of Ferndown, thereby acknowledging its importance at the heart of this community.”

He mentioned that with particularly good timing, a photograph of the church showing its stunning crimson rhododendron bush in full bloom had won the Ferndown In Bloom photography competition and added, “At this special time, a very big thank you must be recorded to the memory of Mrs Margaret Lyon of Dudsbury Avenue whose generosity in donating this land enabled the church to be built in the first place. I’m sure she would be delighted to know it has been the foundation for the vibrant church St Mary’s is today in this community.”

The Mayor thanked the Rector, Rev Martin Howard for an enjoyable weekend of celebratory events, with particular mention of the spectacular floral displays organised by Ann Jones on the theme of Harvest.

St Mary’s is about to embark on its next building phase with planning approval having been granted for the Beacon project to enlarge the church buildings and further develop the work of the church in Ferndown.