Members put their oar in 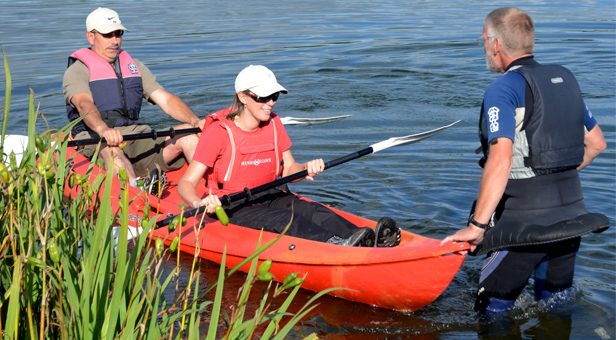 The chance to mess about on the water made a real splash with members of Dorset Blind Association at Blashford Lakes, near Ringwood recently when some were able to try kayaking for the first time.

Under the watchful eye of instructors from Spinnaker Sailing Club, the visually impaired rowers were able to learn how to control their kayaks and were soon making good progress across the water.

“You get a real sense of freedom doing something like this that’s so different from our members’ everyday lives,” says Judy Bannon, Dorset Blind Association’s Bournemouth Community Support Worker.

“It improves fitness and gives members a sense of independence that proves their visual impairment doesn’t have to be a barrier.”

The first-time kayakers were thoroughly briefed on safety issues and escorted at all times.

“These programmes are highly beneficial and very encouraging for the people taking part,” says senior instructor Stephen Taylor who has run many events at the club for New Forest Sailability, enabling people with disabilities to enjoy the benefits of sailing.

“As a group we have played blind cricket and tennis recently, we even had a go at acoustic shooting with some instructors from the Royal Marines and next month we are going to try water skiing.”

At the end of their time on the water, the group lined up by the pontoon for a photo, exhausted but energised by their time spent messing about on the water.