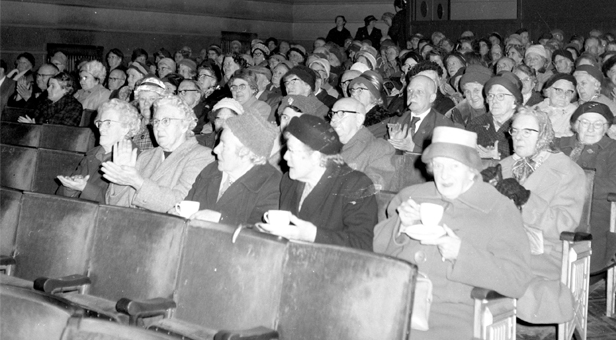 Do you have any memories of the Regent Centre?

Perhaps you had your first kiss and a cuddle in the back row? Or first saw your future wife or husband as your eyes met over a choc-ice during an afternoon matinee.  Or maybe you were there when the troops were entertained during World War II. You may even have been the first person to cry “House” when the Regent became a Mecca Bingo Hall in the late 70s. Or maybe you were last seen being ejected for misbehaviour by Jock, the commissionaire during the 50s and 60s?

If so, the Regent Centre would love to hear from you.

Memories, reminiscences and life changing experiences at the Regent are being collated to celebrate its 30th Anniversary during the weekend of Friday 14 -16 June.

All are due to be collated in a memory book and memory blog.

Alongside these will be running a special project to create memory bunting to decorate the Regent for its big birthday weekend.  Everyone aged from 1–101 can get involved, whether it is making your own bunting from the special template supplied by the Regent Centre, or simply putting your palm print on a bunting triangle.

Anyone wishing to send in their memories can email them to memories@regentcentre.co.uk or drop written memories into the Regent Centre Memory Box in the Foyer. The Blog can be viewed at memories.regentcentre.co.uk