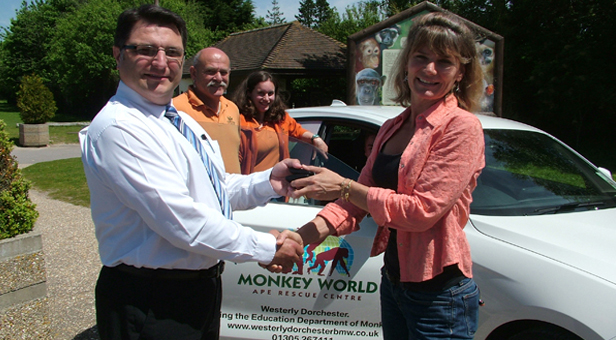 Some children from Bovington Primary School with the Education Team from Monkey World, and all the shoe box donations they collected for the park. ©MonkeyWorld

The education team at Monkey World – Ape Rescue Centre, Wareham, had an excuse to go bananas this week. Their first ever Monkey Mobile, ape-tly named and sponsored by Westerly Dorchester, arrived at the park on 4 June.

The brand new BMW 1 series will be used by the education team to spread the message further afield about the rescue and rehabilitation work at Monkey World and how everyone can help.

“It is a pleasure to be collaborating with such a good cause,” said Stuart Carter of Westerly Dorchester. “We wanted to put something back into the community by supporting Monkey World in educating children and adults about the issues they face, both in the UK and worldwide.  We are privileged to be taking part and helping to raise awareness in the process.”

Shelley Fletcher, operations manager at Monkey World said, “We have a duty and responsibility to educate the next generation and Westerly Dorchester have given us this fantastic car, which will now enable us to spread the Monkey World message across the length and breadth of the country.

“The education team are available to conduct presentations on any topic, as so much links to the work that we do at the park.  For example, if schools are studying citizenship, children can relate to the social interactions of primates; difficult subjects such as bullying and friendships can also be tackled with ease, as many of our primates at the park have suffered and have had to overcome fear, isolation, abuse and loneliness. Even class discussions on healthy eating can be illustrated by a talk from our team using the dietary needs of our primates at the park. So the team are teaching much more than just the specific work that we do and feedback from schools and groups they’ve already visited has been fantastic.”

The Monkey Mobile has already made its first school visit to local school, Bovington Primary.  The children had already received a presentation by the education team and had been so inspired by the visit, that they decided to make up shoe boxes filled with gifts and treats for the primates for the park’s shoe box appeal and presented the team with a staggering 55 shoeboxes, crammed full of food items, socks and towels for the park’s residents.

If you would like a visit from the Monkey Mobile, please contact the education team on 01929 401022.  For more details about the shoe box appeal, visit www.monkeyworld.org/shoe-box-appeal.