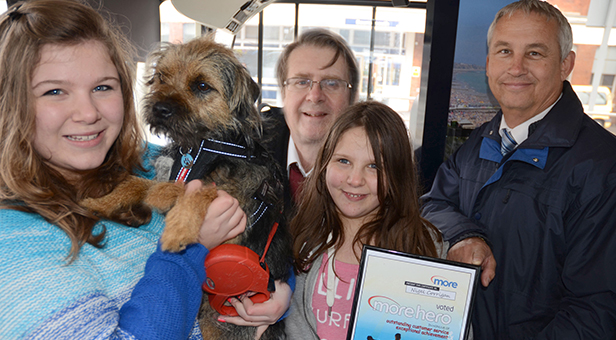 When Monty the year old border terrier slipped his lead and took a 30 minute walk from Branksome to Poole Park Gates, his owners were fraught with worry.  Fortunately Monty, without paws-ing, decided to get on board a more bus driven by Nigel Corrigan, who watched him get on with other passengers and take a seat!  When Nigel asked his customers if anyone owned the furry fare dodger no one claimed him so Nigel took the decision to check the dog collar for a phone number.

He called the Chanoch family from Alum Chine who were relieved to hear that Monty was in safe hands, and rushed to collect him.  More bus Marketing and Communications Manager Nikki Honer received a letter of gratitude from his owners which meant that the commendation could make Nigel their second monthly ‘more hero’.

Monty and his owners, sisters Serena and Amy Chanoch, were invited to attend the presentation ceremony where Nigel received gift vouchers and a more Hero certificate in recognition of his kindness, from Paul Weller the Assistant Operations Manager

“Thankfully the passengers on board were very encouraging and wanted Monty reunited with his family straight away otherwise we would have had to look after him until we reached the end of the route,” said Nigel.

The more hero campaign was launched this year to encourage more bus customers to nominate any of the 280 drivers for the monthly award through a form on the website www.morebus.co.uk/morehero The nominations are judged by management on a monthly basis and the top drivers will win £50 of vouchers and receive certificates and badges in recognition of their achievement.

The company has ensured that it is not just the staff who are rewarded.  Customers who vote for the winning hero will be sent a free week’s travel on the key smartcard.