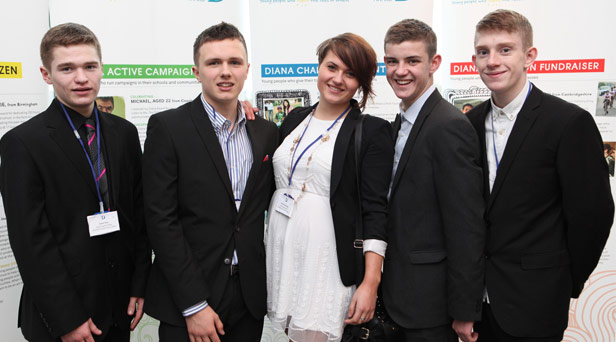 A group of Bournemouth friends who have raised thousands of pounds to help young people who need intensive care have won another prestigious award.

Team 4K – five students from Avonbourne College – received a Diana Award after being nominated by their school for their fundraising efforts.

This award is named after the late Princess Diana and recognises the power of young people to change the world and build a better society for all.

They have used their exceptional entrepreneurial skills to raise more than £4,000 for Southampton General Hospital’s paediatric intensive care unit, which cared for their friend Kyle Rees.

After receiving a loan of £1,000 the students produced and sold ‘for Kyle’ wristbands, which made a £4,000 profit for Southampton General Hospital’s paediatric intensive care unit.

The sixth formers are now developing a new product and have set themselves a target of raising a further £20,000 by the end of this year for the hospital.

Team 4K member Tom Mansfield said: “We are incredibly honoured that our school nominated us for this award.

“Our teachers and fellow students have supported us throughout and are continuing to help us as we work on a new product to sell.

“This whole experience has been life changing for us all. We’re determined that it doesn’t end here.

“We’ll continue raising money to help the hospital for the wonderful work it is doing caring for seriously ill children and young people from across the South.”